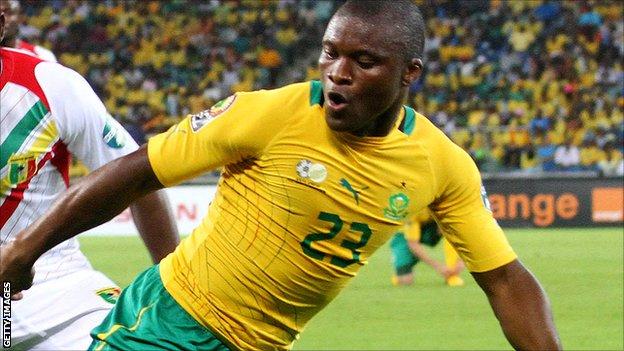 Bournemouth have signed Malmo striker Tokelo Rantie for an undisclosed fee, thought to be a club record.

The Cherries are awaiting international clearance and a work permit, and he will not feature in Wednesday's Capital One Cup tie at Watford.

The 22-year-old has won 12 caps for South Africa after making his debut against Botswana last year.

He is expected to link up with the rest of the Bournemouth squad later this week.

The club's previous record signing was Matt Tubbs, who joined them from Crawley for about £800,000 in January 2012.

And assistant manager Jason Tindall believes Rantie is a player who will get supporters excited at the Goldsands Stadium.

"I imagine he will be unknown to people in England, but he is a very exciting prospect and a fantastic talent," Tindall told the club website.

"He's a full international as well and I'm sure he will have the fans on the edge of their seats. He's very dynamic, skilful and intelligent, so we are delighted with the signing of Tokelo.

"He was sought after across Europe and a number of teams enquired about him and put offers into Malmo, so it is testament to the football club that we have managed to secure his services with the amount of competition that we had.

"It shows the direction we are going in, the ambition of the club and I think it sends out a statement to everybody as well."