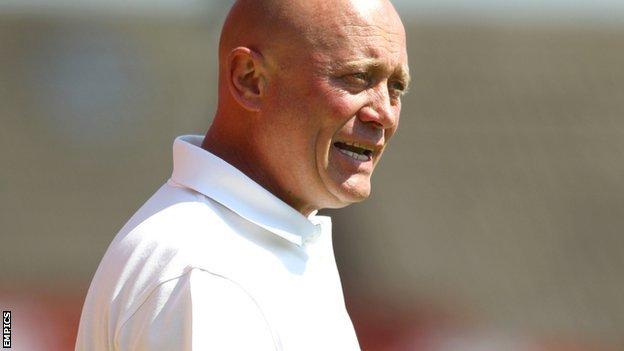 Alfreton boss Nicky Law fears new investment in the club could force him to leave the Impact Arena.

The 51-year-old, who joined in 2007, is in the final year of his contract and insists he wants to stay with the Reds.

But he would not deny rumours linking him with the vacant job at Conference Premier rivals Gateshead.

"It is a bit of a concern for me, because if there is potential new owners I need to know where I stand," Law told BBC Radio Derby.

"I'm Alfreton Town's manager and I'd like to stay that way, but for how long that might be is not my decision unfortunately.

"At the minute I've just got this season to run. I know where I am with present chairman, but it is difficult times right now because I haven't been offered a new contract.

"I'll be honest, the further we go into the season the twitchier I'll get."

Despite the uncertainty around Law's future, Alfreton have signed trialists Jack Andrews, 19, and Jay McFadzean, 21.

Defender Andrews, whose length of contract has not been specified by the Conference Premier club, was released by Nottingham Forest after coming through the Championship club's academy.