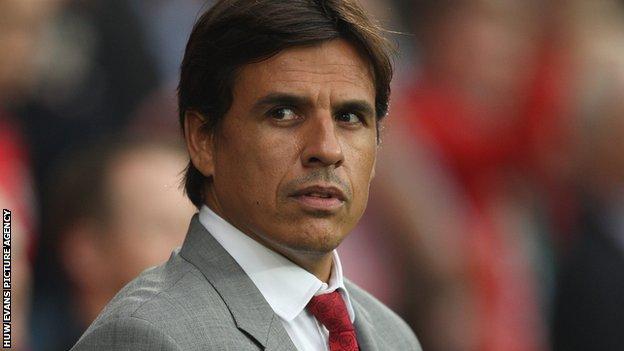 Wales boss Chris Coleman has warned club managers not to view international matches as a chance to rest players.

Although their 2014 World Cup hopes are realistically over, Wales can still finish third in Group A to boost their seeding for future campaigns.

Wales go to Macedonia on 6 September and host Serbia in Cardiff four days later in games Coleman sees as crucial.

"We've got to keep progressing so these games are huge for us, massive, I can't stress that enough," Coleman said.

"So this two-week period where maybe certain clubs, certain managers, may look at it and say that there's nothing on it, so maybe we'll use this period as a rest period as one or two of our players have got little knocks.

"There's absolutely no interest from us in that whatsoever, because this is as important as the last game, the game before, the next game.

"It's unrealistic for us to think we'll qualify now, but that doesn't mean we're not representing Wales and every game is an important one.

"We've got to finish as high as we can because it's not just these qualifiers, it's the next ones and how high we can get ourselves up in the rankings."

Wales are lying 13 points behind leaders Belgium and 10 adrift of second-placed Croatia, but Serbia are only a point ahead of Wales in third place.

Macedonia are bottom of the group, although only two points behind Wales who are in fourth, and Coleman's side conclude their group fixtures with the return against them on 11 October, then a trip to face Belgium on 15 October.

But first up is a potentially tricky trip to Skopje, before facing Serbia at Cardiff City Stadium.

"This period is massive for us and we need all our best players. There's no resting period these next two weeks for anyone," Coleman added.

"The acid test is players who play this weekend [for their clubs], don't come with us, miss the two games and then play the very next game for their club. That tells you a lot.

"Sometimes that is fair enough. They're not our players, we know that. We borrow them but nevertheless we're still representing our country and still to me - maybe I'm a romantic - that's the biggest honour as a player."