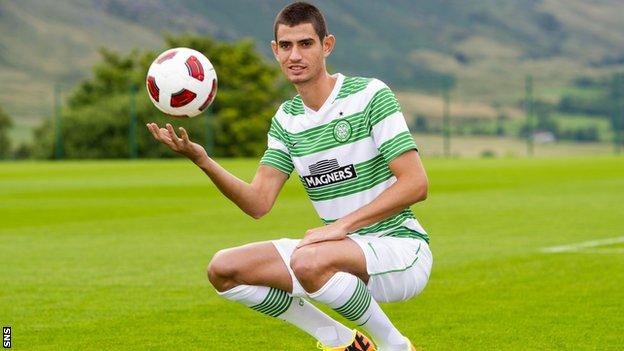 Israel midfielder Nir Biton believes he has joined one of Europe's top clubs after his switch from Ashdod to Celtic for an undisclosed fee.

The 21-year-old holding player, who made his Israel debut in 2010, has signed a four-year contract.

"I am at Celtic, one of the best clubs in Europe," said the player who had two trials for Manchester City in 2012.

"When you come to a club like Celtic, you expect to win leagues, cups and to go far in the Champions League."

Biton, who was in Glasgow to watch Celtic's Champions League win against Shakhter Karagandy., was in the last year of his contract with Israeli Premier League club Ashdod.

The midfielder, who has six caps, will join up with international team-mate Beram Kayal and former club colleague Efe Ambrose in Glasgow.

Ahead of Saturday's transfer deadline, Celtic have also agreed a fee with Schalke for Finland international Teemu Pukki but have yet to come to an arrangement on the striker's personal demands.

Celtic manager Neil Lennon is eager to strengthen his squad ahead of a tough Champions League group stage, which begins on 18 September away to AC Milan and also includes matches against Barcelona and Ajax.