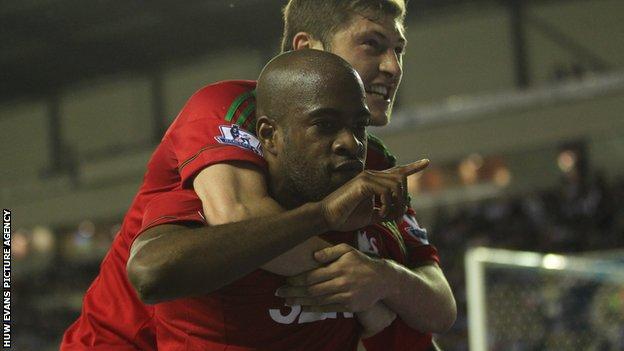 Swansea City have secured the return of Dutch international Dwight Tiendalli on a three-year contract.

The full-back will cover for the Swans' injured Wales defender Neil Taylor who has been ruled out for four to six weeks with a thigh injury.

The Swans had offered Tiendalli a new contract in May but had failed to agree terms with the player.

"I was very grateful to Swansea for the chance they gave me last season, especially to play in the Premier League - the best league in the world.

"I had a great experience here last season and I'm delighted to be back," said Tiendalli.

The full-back made 25 appearances for the Swans last season after arriving as a free agent in September as cover for Taylor, who broke a leg last season

Taylor is now set to be out for four to six weeks after suffering severe bruising on his thigh during Swansea's 5-1 Europa League win over Petrolul Ploiesti.

Tiendalli's form in both full-back positions earned him a call-up to the Netherlands squad alongside team-mates Michel Vorm and Jonathan de Guzman.

"I know the people, the club, the stadium and the city," said Tiendalli.

"For me it's amazing to get back and to be part of Swansea City again. It took a little bit longer than expected to finalise, but my first thought was always to sign for Swansea.

"I played 25 games last season. That was a lot of games, more than I expected given the situation I was in last summer when I didn't have a club.

"I was very grateful to Swansea for the chance they gave me last season, especially to play in the Premier League - the best league in the world.

"Also, without Swansea I wouldn't have made an appearance in the national squad. I think I did a good job overall, but as a person I'm never satisfied and I believe I can always be better.

"At the moment though I am just happy to be back and want to get myself ready for when the manager needs me."