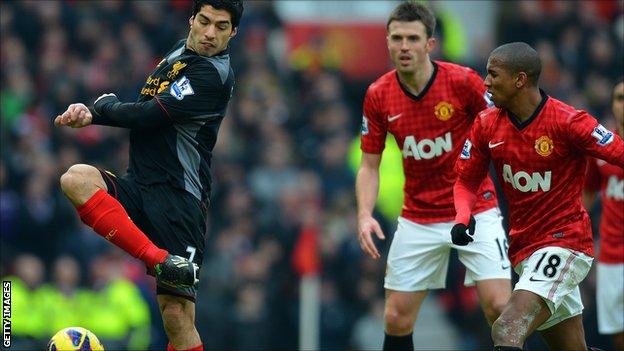 Banned Liverpool striker Luis Suarez could return to face Manchester United after the two sides were drawn against each other in the Capital One Cup.

Holders Swansea make the trip to Championship side Birmingham.

Manchester City will host Wigan, while League One side Swindon will host Chelsea on 24-25 September.

Suarez received a 10-match ban for biting Chelsea defender Branislav Ivanovic in April and having missed four games last term, he could be in line to return for Liverpool's visit to Old Trafford.

As part of his suspension, he will miss the Premier League game between the two sides at Anfield this Sunday.

And the 26-year-old's future has been the subject of sustained speculation this summer after he indicated he wanted to leave Liverpool.

United have faced Liverpool on four previous occasions in various guises of the League Cup - losing the finals at Wembley in 1983 and Cardiff's Millennium Stadium in 2003 plus a tie at Anfield in November 1985 but winning the only meeting at Old Trafford to date in 1990.

Premier League side Southampton welcome League One's Bristol City to St Mary's, while Leeds travel to Newcastle, who sneaked past Morecambe on Wednesday, and Norwich face Watford at Vicarage Road.