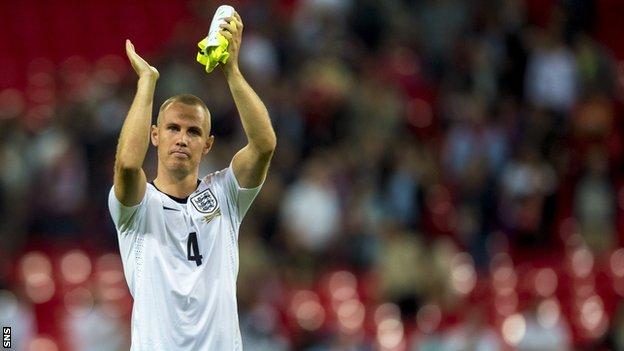 Vancouver Whitecaps have said they have "no intention" of allowing Kenny Miller to cut short his contract despite interest from his former club Rangers.

The 33-year-old, who this month retired from international football, is under contract until summer 2014.

Rangers manager Ally McCoist had revealed he would be interested in signing the former Scotland striker.

"If there was an opportunity to get Kenny, I wouldn't be doing my job if I didn't explore that," he said.

Rangers, who lead League One, are under a transfer embargo until 1 September and can only sign free agents until the January window.

"He would certainly interest me," McCoist said of Miller, who left the international scene after scoring in Scotland's 3-2 friendly defeat by England at Wembley.

"I wouldn't rule it out. I'll certainly be making enquiries.

"I don't know if Kenny would want to come, if we could afford him. There are millions of questions, but I do think we need another forward."

Meanwhile, Rangers have released Scotland Under-21 defender Darren Cole days after he was disciplined for failing to turn up for a reserve game.

The 21-year-old, who missed the match against Cambuslang Rangers, made five first-team appearances for Rangers but had not featured this season.

"Darren's contract has been terminated and he goes with our best wishes," said McCoist. "It's a mutually-agreeable situation and hopefully he progresses."

Cole's departure could give McCoist room for manoeuvre in the transfer market, with 19-year-old midfielder Sam Kelly having been training with Rangers after being released by Everton.

"Sam has showed up well in training," said McCoist, who will talk to his chief executive about the teenager.

"I haven't had a chance to speak to Craig Mather about him yet, but I will to see if there's a possibility we could offer him something.

"I have said my priorities are at centre-forward and centre-half, there's no doubt about that, and Sam doesn't play either of those.