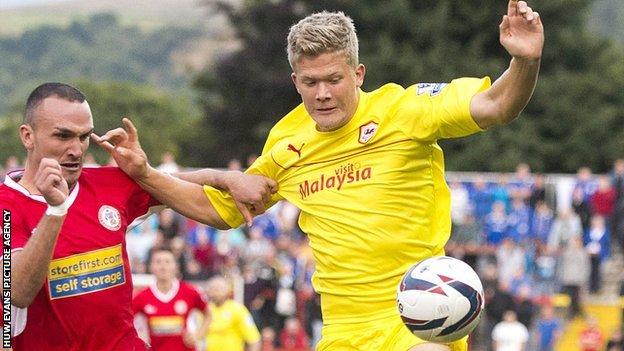 Cardiff City manager Malky Mackay sympathised with Andreas Cornelius after the striker aggravated the ankle problem that curtailed his pre-season.

But early indications are that the injury to the £7.5m summer buy from Copenhagen is not long term.

"It's disappointing, but he's 10 minutes into his career here so we'll give him time," Mackay said.

"It was unfortunate it was the ankle he did a couple of weeks ago, so he was feeling it right away.

"It was a heavy knock he took, so we got him off on a stretcher purely as a precaution.

"We'll assess him over the next couple of days. He'll probably miss the weekend [Saturday's home Premier League game against Everton] but it's not something that's long-term."

While the injury to Cornelius took the shine off the win at Accrington, Mackay was delighted with the two "fantastic" goals from Nicky Maynard and Rudy Gestede that earned a third-round trip to West Ham United.

The Hammers were Cardiff's conquerors on the opening day of the Premier League season and Mackay conceded it would be another tough test at Upton Park.

"They're a Premier League team, we obviously know them well so it's a difficult task," Mackay said.

"It might depend on what team they play and what team we play, but we could have played anybody so it doesn't [the draw] really matter]."