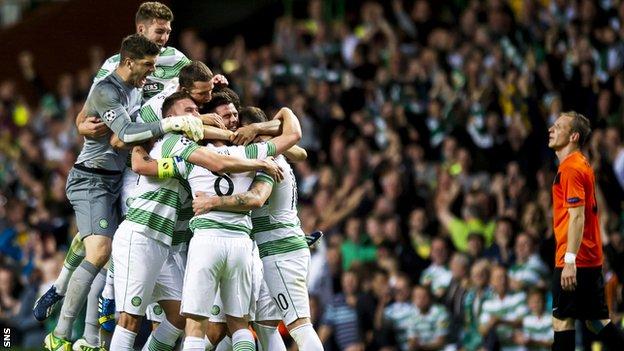 Celtic manager Neil Lennon has described his side's qualification for the as his biggest achievement in the game.

The Bhoys overturned a two-goal deficit by beating Shakhter Karagandy 3-0 in the play-off round second leg.

"It's the greatest thing I've ever done in football," said Lennon who lost three key players this summer.

The Scottish champions will be in pot four for Thursday's group-stage draw where they could meet an English team.

Goals from Kris Commons and Georgios Samaras cancelled out the 2-0 lead that Shakhter had from the first leg, before James Forrest scored the winner in stoppage time.

"We lost three important players and it's been difficult to replace them," said Lennon.

None of their summer signings were deemed ready by Lennon to start the second leg of the play-off, with deals for and still pending.

And, asked if there would be any further signings now that Celtic had reached the lucrative group stage, Lennon said: "I don't know. You are asking the wrong person.

"We came into this with no real help, which makes it even more remarkable what we have achieved tonight."

Lennon praised his players who have reached the group stage for the second year running and who he believes were wrongfully criticised for their performance in the first leg.

"I am relieved; there's a great sense of pride in what we've achieved tonight considering we lost Hooper, Wanyama and Kelvin, who were the spine of the team really for the last year and a half," he said.

"I'm angry as well at the reaction from the first leg to the team.

"For my liking, the environment here is all wrong - there's far too much negativity.

"These players have given everything for the club and put Scottish football in a very good light last year.

"I wouldn't say they had a bad night last week. They just didn't take their chances.

"But the knee-jerk reaction to one average performance is baffling to me and it just makes the job impossible at times."

Anthony Stokes returned to the side following injury to set up James Forrest for the winning goal in stoppage time.

"Wonderful piece of skill from Stokes, who I thought did really well to last the course of the game considering he hasn't played for a little while," added Lennon.

"And James Forrest, who for some reason a section of our support can't take to, I don't know why because he's one of the best players to have played for this club for a long time.

"I thought he was brilliant tonight and he comes up with a goal that's worth its weight in gold for us."