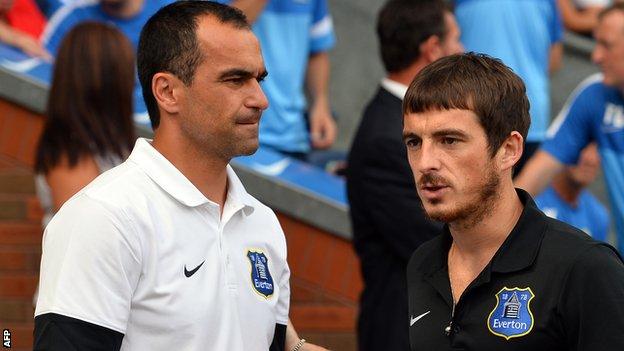 Roberto Martinez has called the transfer window "a footballing circus" after being questioned about Leighton Baines and Marouane Fellaini.

Manchester United are reported to be preparing a fresh offer after their £28m bid for the pair was rejected earlier this month.

The Everton boss declined to answer direct questions on the pair.

Everton manager Roberto Martinez regards the transfer window as "a circus" - his problem is that the circus does not leave town until Monday.

And it is certain Manchester United and former manager David Moyes will be back at his door in another attempt to prise one of his major assets away from Goodison Park.

Talk of an imminent renewed offer for Fellaini was rife at Old Trafford on Monday and there remains the belief Everton would sell the Belgian at the right, very expensive price.

It is highly unlikely, however, that Everton will also sell Leighton Baines to Moyes. It is believed Baines would welcome a move to Old Trafford but only if it was in a deal acceptable to Everton and they are refusing to alter their stance. If this remains the case he will carry on as the model professional he is without further agitating for a move.

But he said of the transfer window: "It is becoming a bit of a footballing circus and it is not helping anyone."

He added: "I am sure the authorities will look at it and do something about it."

Everton called the joint bid "derisory and insulting", while Martinez labelled it a "waste of time", but reports have continued to suggest that both could reunite with former Toffees manager David Moyes.

He added: "There is a lot of speculation and stories, but once you have important games to prepare for, it is a bit of a farcical position that goes against the values we are trying to present in the Premier League.

Belgium midfielder Fellaini had a £23.5m release clause in his contract which expired at the end of July and Martinez has indicated the 25-year-old will not be allowed to leave for less than that figure.

Fellaini came off the bench and scored an extra-time winner in the 2-1 win over Stevenage in the Capital One Cup on Wednesday, while Baines was an unused substitute.

Everton have signed Wigan Athletic trio Arouna Kone,Antolin Alcaraz and Joel Robles this summer, as well as Gerard Deulofeu on loan from Barcelona.