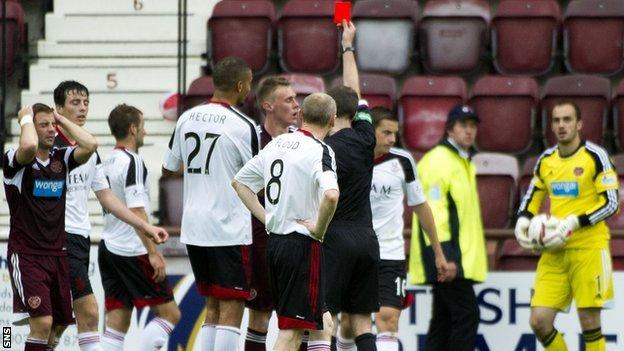 Hearts defender Kevin McHattie's claim of wrongful dismissal in has been rejected by the Scottish FA's disciplinary panel.

The 20-year-old was judged to have denied an opposing team a goal or obvious goal-scoring opportunity when he challenged Calvin Zola.

Niall McGinn converted the resulting penalty to level the match before Hearts went on to win 2-1.

McHattie will now be banned for the match against Inverness on Saturday.

The Tynecastle side will also be without captain Danny Wilson, who was given an automatic one-game ban for receiving a red card after the final whistle against the Dons.

The defender was accused of using language deemed offensive and insulting directed at the opposing team's players.

And manager Gary Locke commented: "Danny has apologised to the players which I fully expected him to do.

"That is one of the reasons I made him captain. He is a young lad but he handles himself very well but he let himself down after the game on Saturday.

"He made a poor remark and we will deal with that in-house.

"I laid down the law at the start of the season, and said we can't afford any stupid bookings and suspensions so Danny will be fined in-house and hopefully we will learn from our mistakes."