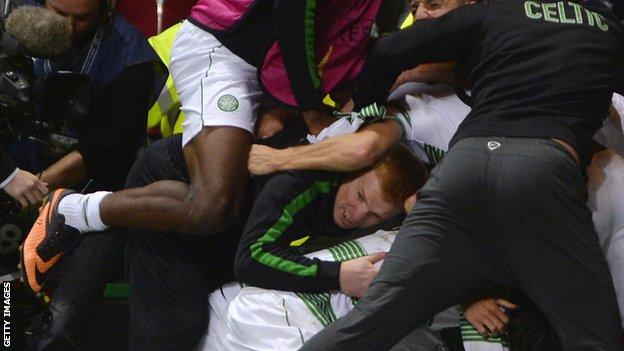 Neil Lennon was off and running.

His touchline gallop to join in the Celtic celebrations and "pile-on" to acclaim James Forrest's injury-time winner illustrated what Champions League qualification means.

High-fiving fans as he made his way back to the dugout, before receiving some calming words of advice from assistant manger Johan Mjallby, Lennon puffed out his cheeks and re-focused.

Successfully seeing out injury time to secure a place in the group stage at Shakhter Karagandy's expense, and the draw on Thursday afternoon, was done without three of the club's most important players.

The departed Gary Hooper, Victor Wanyama and Kelvin Wilson all featured heavily as Celtic progressed to the last 16 stage of the competition.

But restoring Efe Ambrose to central defence to partner Mikael Lustig and playing Charlie Mulgrew and Adam Matthews on the flanks improved Celtic defensively, while Anthony Stokes eased some of the attacking burden on Georgios Samaras.

And a clearly irked Lennon was keen to convey his frustration with his side's critics - and his admiration for the current squad - in claiming a place in the cash-rich group stage.

His steely-eyed post-match media conference was in stark contrast to his James Forrest-induced victory gallop.

But the Celtic manager's mood will surely improve following Thursday's draw and adding to his squad.

The sobering effect of the first leg defeat in Kazakstan was forgotten and swept aside as Celtic Park once again proved too hot to handle for a European side.

"It's the greatest thing I've ever done in football," said the Celtic boss.

The Scottish champions have been drawn against Barcelona, AC Milan and Ajax in Group H. 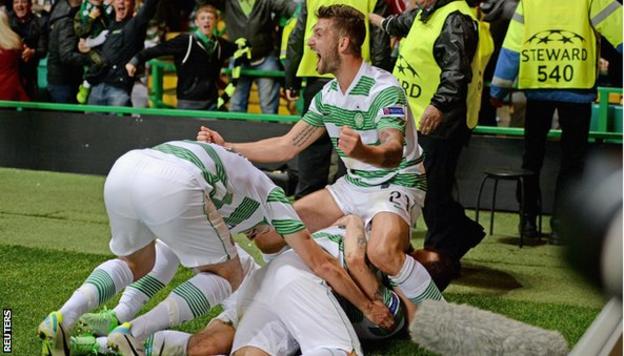 Lennon had indicated he would like a 'Battle of Britain' and also to be drawn against Real Madrid, with the Spanish outfit's midfielder Xabi Alonso indicating the feeling was mutual.

"What a night for @celticfc!! Celtic Park buzzing again. I wish we could meet in group stage and play for once in there," he tweeted.

The club have agreed a fee with Schalke for Finland striker Teemu Pukki and Ashdod midfielder Nir Biton is also moving to Glasgow.

"We lost three important players and it's been difficult to replace them," said Lennon once the dust had settled on another pulsating night at Celtic Park.

"We came into this with no real help, which makes it even more remarkable what we have achieved."

Lennon will hope his side continue to punch above their weight against Europe's finest in the coming months.

And he may be on the move again...