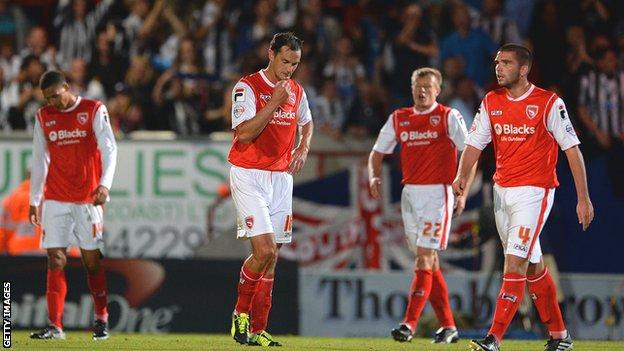 Captain Mark Hughes paid tribute to a record Globe Arena crowd as Morecambe bravely bowed out of the Capital One Cup at the hands of Newcastle United.

The Shrimps of League Two

The attendance of 5,375 was the highest for a competitive game since the stadium opened in August 2010.

No fairytale this year...

Bradford City reached the final of the Capital One Cup as a League Two club last season, but after defeats for Morecambe and Accrington on Wednesday, there are no fourth-tier sides left in the 2013-14 competition.

"We know Newcastle have great fans but the Morecambe fans matched them," said defender Hughes. "Hopefully we gave them a performance they deserved."

Jim Bentley's Morecambe dominated for long spells of their second-round clash against the Premier League side, but were eventually defeated by goals from brothers Shola and Sammy Ameobi.

Hughes, a free transfer arrival from Bury in the summer, told BBC Radio Lancashire: "The result didn't reflect the game but there are plenty of positives to take into our league form.

"We had four good chances in the first half. Against a quality team, you've got to take them.

"We always knew that when they were bringing people like Shola Ameobi and Hatem Ben Arfa on, they were going to get chances. A little bit of quality told in the end."