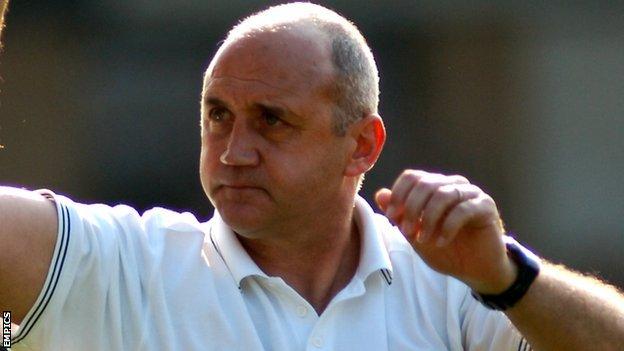 Cambridge United boss Richard Money has questioned whether staff from rival Conference Premier sides should be in charge of the England non-league team.

Money told BBC Radio Cambridgeshire he is "not happy" with the situation.

The England C team selects players from outside of the Football League - it is essentially a non-league national side.

They face equivalent teams from other countries and often play friendlies against under-23 squads.

Paul Fairclough (pictured) has been manager since 2005.

He claims it is unfair that Fairclough and Burr will have access to players who will appear against their clubs.

However, the Football Association insisted that England C staff are "trustworthy coaches from non-league football".

Cambridge players Ryan Donaldson, Harrison Dunk and Luke Berry have all been called up for a England C game against Latvia Under-23s on 10 September.

The U's and Barnet are joint-top of the Conference Premier with 11 points, although the Bees have the better goal difference, and last season's beaten play-off semi-finalists Kidderminster are two points further back.

"Three of our players are going to go away with [people from] two of our big rival clubs - one director of football and one manager.

"Tell me where else in life that happens? It can't happen. Anything could happen on that trip, I'm not suggesting it's going to.

"I'd like to think the authorities will change it. I'm not offering any solution, I'm just putting it out there and I think it needs to be seriously thought about - but I am pleased for the three players."

The FA said that Fairclough's professionalism and integrity were beyond reproach.

A spokesman added: "England C is an opportunity for players outside the top four divisions to represent their country in international tournaments and the staff of England C reflects that level of the game with experienced and trustworthy coaches from non-league football."