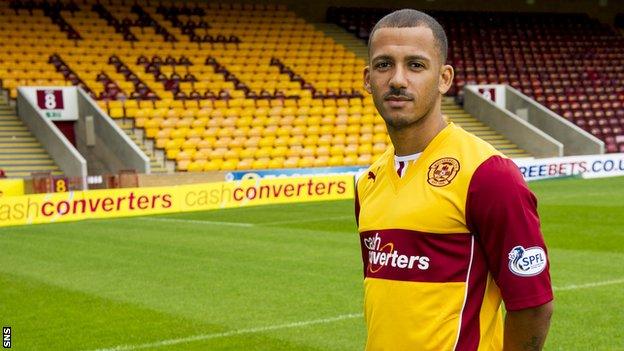 Motherwell have signed winger Lionel Ainsworth on loan from Rotherham until January.

The 25-year-old has spent his entire club career so far in England, starting at Derby County and including a spell at Huddersfield Town.

"I am very pleased to be here; it's great to have joined a big club in Scotland," Ainsworth told the Motherwell website.

"I've heard nothing but good things so I just can't wait to get started."

Chris Humphrey, who played right wing for the Steelmen over the past four years, left to join Preston North End earlier this summer and 'Well manager Stuart McCall is pleased to have signed a replacement.

"It's an area we've been looking to fill for a while now," he explained.

"I got a call out the blue about a week ago to alert me to his situation and that he would be available.

"I know of him when my team at the time, Bradford, played against him whilst at Hereford and he was flying.

"He's been about, won a couple of promotions but has fallen out of favour at his parent club for whatever reason.

"Initially, it will be a short-term loan but we'll see what happens. He has a good pedigree, is super quick and hopefully he will add a different dimension for us."

"It is going to be something different for me but I am going to embrace it and do everything I can to make everyone happy," he added.

"In particular, I want to repay the faith the manager has in me by bringing me in."