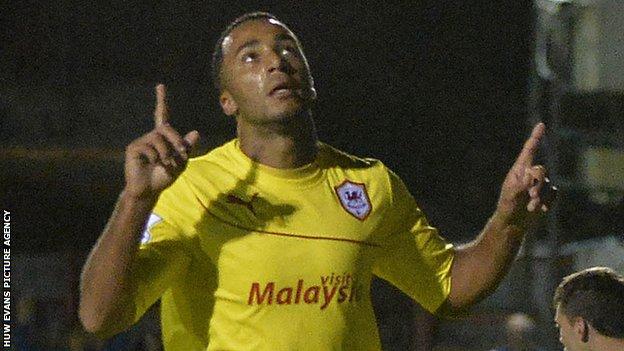 Maynard scored in the 2-0 Capital One Cup win at Accrington Stanley after 25-year-old Campbell claimed two goals in the 3-2 Premier League victory over Manchester City on Sunday.

After eight months out during the 2012-13 season with a knee injury, Maynard is targeting a regular place.

"We need to give each other competition," said Maynard, 26.

"If there's only one scoring he's [Fraizer] going to bank on him playing every weekend.

I've not been playing as many minutes as I like. I was chomping at the bit to get a run-out

"We need to be pushing each other and and that will only be good for Cardiff City.

"Whenever you get the chance to play in any games you need to take your chance and I'd like to think that me and Fraizer have been taking that.

"It's [striker competition] given the gaffer [manager Malky Mackay] a few headaches which he would like."

The competition between Maynard and Campbell is all the more important after Danish striker Andreas Cornelius was taken off on a stretcher against Accrington with an ankle injury.

Early indications are that the injury to the £7.5m summer buy from Copenhagen is not long term.

Maynard returned to first-team action at the end of last season after suffering a torn anterior cruciate ligament in his knee during a 2-0 win at Millwall.

The former Bristol City forward scored on the final day of last season against Hull City and is now keen to get as much game-time as possible.

"I've not been playing as many minutes as I like. I was chomping at the bit to get a run-out. Whenever I get a chance I'm looking to take it," he added.

"It's been a massive eight months out last season. It's been a good pre-season. I have been looked after well.

"I feel sharp and I'm just hungry to get as many minutes as possible."

Maynard believes that the victory over Manchester City has given the squad a boost of confidence as they prepare for a trip to West Ham in the next round of the Capital One Cup.

"We believe we can beat anyone which we proved on Sunday. We are in the next round and it's up to us to perform," Maynard said.

"We have got massive strength in depth. The lads played well on Sunday. We have got a lot of players chomping at the bit and all we can do is perform when we are asked to."