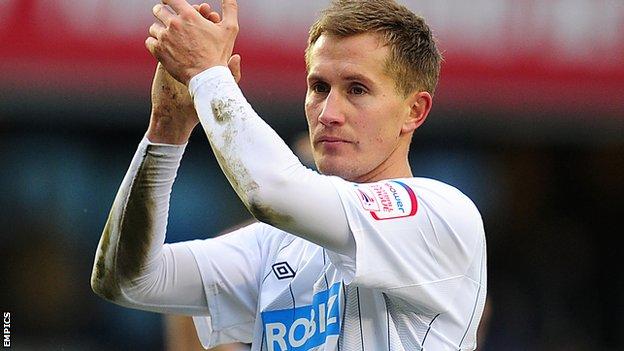 A £1.5m signing from Tromso in 2004, the 31-year-old Norway international made 350 appearances for the Lancashire club, scoring 47 goals.

at the end of last season, but was told that

"This club has been a part of my life for nine years and I have given everything," he told the club website.

"There have been some good times and some bad times, but I think the fans and the club will have more good memories of me than bad.

I've always shown my love for the club and for the fans. I've made friends for life

"I want to play football - that is the main reason for me leaving. Of course it has been tough over the last couple of years. I've always shown my love for the club and for the fans. I've made friends for life."

for an undisclosed fee on Wednesday.

The 22-year-old joined from Leicester on a four-year contract, fitting the profile of manager Gary Bowyer's mould for a young and hungry squad.

On Pedersen's exit, Bowyer added: "Morten has been a truly great servant to this club. His loyalty, professionalism and dedication were second to none.

"He was low maintenance, he never caused us any problems and he was always available for selection, so he was a great role model for the younger lads. He goes with our very best wishes for the future."

Pedersen follows the likes of and both experienced former internationals, in leaving Blackburn this summer as the Championship club looked to reduce their wage bill to comply with Financial Fair Play rules.