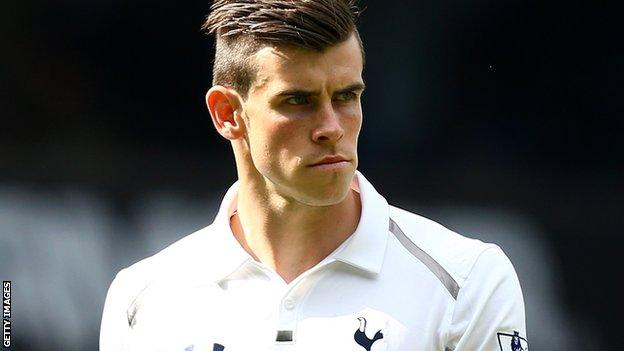 The 24-year-old has failed to report for three days of training this week, and manager Andre Villas-Boas said Spurs will consider fining the forward.

Villas-Boas said Bale's action was "not the correct behaviour" but Hartson, 38, defended the Wales international.

"I think Tottenham are being a bit ridiculous over that," he said.

"I think it was the sensible thing [to miss training]. If he goes into training, all of a sudden all the cameras are on him and everything else. I think they should cut him a bit of slack."

Bale has been linked with Real all summer and Villas-Boas says the record-breaking transfer "could happen very, very soon".

Hartson, a former Wales striker, added: "They're just about to get £86m for him and they want to fine him an extra couple of hundred grand. I think a little bit of common sense should prevail there.

"He was outstanding for them last season. How many points did he win for Tottenham Hotspur last season on his own basically?

"The fact [is] that they've bought four or five players on the back of Gareth Bale."

Tottenham are reluctant to sell until they have signed a replacement. They have been linked with Roma's £30m-rated Argentina forward Erik Lamela, but missed out on Brazil midfielder Willian, who joined Premier League rivals Chelsea.

He has not featured for Spurs this season and missed Wales' recent friendly against the Republic of Ireland because of a foot injury.

Wales manager Chris Coleman is hopeful Bale will be available for the World Cup qualifiers against Macedonia and Serbia in September despite the uncertainty over his club future.