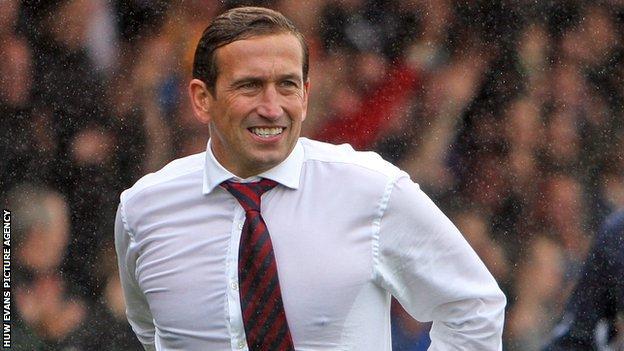 Newport County are in talks with a midfielder they hope to sign before the transfer window closes on Monday.

"It's a midfield player so that could be done before the [transfer] deadline and every other area I'm more than pleased with," said Edinburgh.

"So if we can conclude that one I'll be delighted."

If the club's bid is successful, the new signing would join defenders and plus goalkeeper as a fresh face involved in the current campaign.

Newport travel to Scunthorpe on Saturday in League Two boosted by their performance in Tuesday's Capital One Cup defeat by Premier League side West Bromwich Albion.

Edinburgh was proud of his players' efforts, but says a heavier defeat could have undermined confidence.

And he says competition for places have increased following the performance at The Hawthorns.

"I've got a lot of food for thought," said Edinburgh.

"Everyone played very, very well on the evening… so it's put everyone in the position that whoever comes and plays will hit the ground running.

"And we're pleased with the outcome and we got some minutes in some players who hadn't played for a while.

"Ihmael Yakubu trained today [Thursday] and will come back into the squad.

"And we've got to realise we haven't even had Aaron O'Connor start one game this season, let alone be sub.

The Welsh club are seeking their first league away win since returning to the Football League, having lost 3-1 at Northampton and drawn 1-1 at Dagenham & Redbridge.

But Edinburgh is confident an away win will come "sooner than later" if they maintain their form.

"We've gone up a level. The away games are going to be a lot tougher and as long as the performances are right then as a manager you know that the results are going to come along eventually.

"And our two away performances, for long periods of time in both games, have been excellent.

"So no concerns about that... but it would be fantastic and an unbelievable result if we could go there and get an away win.