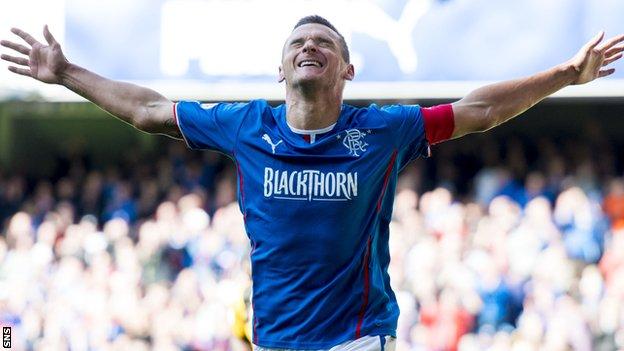 Lee McCulloch netted the first competitive hat-trick of his career as Scottish League One leaders Rangers romped to victory over East Fife.

Striker Nicky Clark set the ball rolling with a debut goal less than a minute after kick-off at Ibrox.

Captain McCulloch scored twice as the result was settled before the break.

Lewis Macleod added to the scoreline early in the second half and McCulloch completed his hat-trick as Rangers remain three points clear at the top.

In addition to Clark, goalkeeper Cammy Bell made his competitive debut, with both players featuring as the club's two permitted trialists in front of a crowd of 42,870.

Rangers will finally be able to register their eight new signings when a transfer embargo ends at midnight on Saturday.

But fellow new recruits Jon Daly and Nicky Law had featured in previous games this season but had both reached their maximum number of trialist appearances.

Nicky Clark, who netted more than 40 goals in the same division last season with Queen of the South, opened his account for the season when he raced on to McCulloch's flick-on and coolly firing past goalkeeper Michael Andrews after only 30 seconds.

Bell had his first touch when he was called into action to smother Cedric Tuta's low drive.

McCulloch squandered a chance when he headed just wide then Clark fired into the side-netting.

Rangers' second came when McCulloch threw himself in front of a Lee Wallace ball into the box and glanced a header beyond the helpless Andrews.

The pair combined well again as Rangers claimed their third, with Wallace supplying the cross from the left and McCulloch nodding home at the back post.

Macleod netted in impressive style nine minutes after the restart with a superb 20-yard volley.

McCulloch completed his hat-trick with 62 minutes gone with yet another header, Kyle McAusland finding his captain's head with the cross.