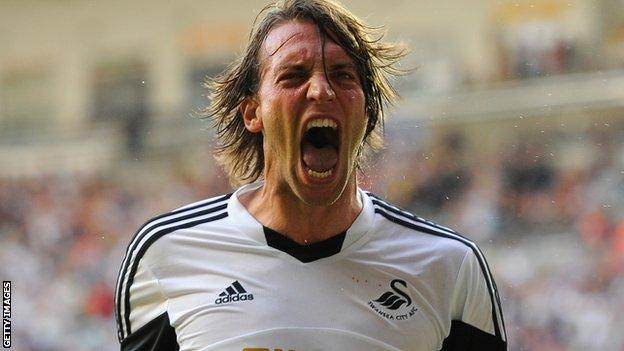 Swansea City have been drawn with Spanish side Valencia in Group A of the Europa League.

They will also face Kuban Krasnodar of Russia and St Gallen of Switzerland.

Andre Villas-Boas' Tottenham are in Group K with Russian side Anzhi Makhachkala, Sheriff Tiraspol of Moldova and Tromso of Norway.

Wigan will meet Russian team Rubin Kazan, Maribor of Slovenia and Zulte Waregem of Belgium after being pulled out in Group D.

Championship side Wigan enter the competition at the group stage after winning last season's FA Cup.

Spurs made it through after beating Dinamo Tbilisi 8-0 on aggregate, while Swansea lost 2-1 at Petrolul Ploiesti but won 6-3 on aggregate.

Swansea City's draw could see winger Pablo Hernandez returning to Valencia - he signed for the Swans for £5.55m this summer - while Chico Flores, Michu and Jordi Amat are former La Liga players playing for Michael Laudrup's Capital One Cup champions.

Speaking ahead of the draw, manager Laudrup commented: "I said from the beginning last season that I like the cup competitions.

"Teams who cannot win the league always have a chance in the cups and we proved that by winning the Capital One Cup last year."