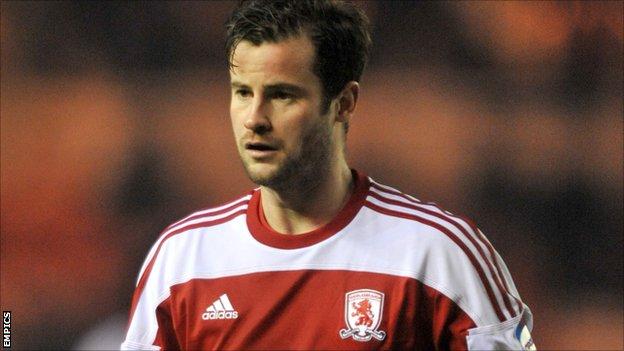 Hartlepool United manager Colin Cooper would welcome a deal for free agent defender Matthew Bates, who has been training with the club this season.

Bates left Bristol City when a short-term contract expired at the end of last season, after 13 appearances.

The 26-year-old previously played 126 games for Middlesbrough, although knee injuries limited his opportunities.

"If we could do something and Matthew was keen, why wouldn't you take someone of his quality," Bates told BBC Tees.

Cooper, who worked at Boro as part of Tony Mowbray's staff during Bates' time at the Riverside, is happy to have the former England under-19 international involved at Victoria Park.

"We've given Matthew the opportunity to play football and train with us," he added.

"We're four or five games into the season but it's up to him how long he wants that to go on for.

"Pools are not rich with finances, so if there's something better out there for him, we understand. We're just giving him the opportunity to stay fit."

During an eight-year spell in the first-team on Teesside, Bates captained the club, but also had loan spells earlier in his career at Darlington, Ipswich Town and Norwich City.