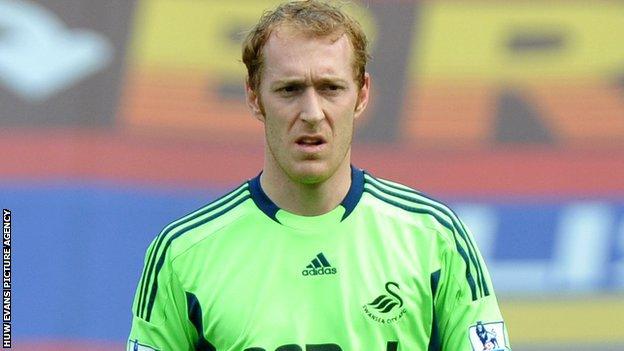 Swansea City goalkeeper Gerhard Tremmel criticised the "nasty" shining of a laser light at his face in their by Petrolul Ploiesti.

The Swans will go into Friday's Europa League group-stage draw following a 6-3 aggregate win over the Romanian side.

But Tremmel and manager Michael Laudrup hope there will be no repeat of the laser incident.

"There's always people trying to disturb you whenever possible and it's a nasty thing," said Tremmel.

"I think it's nothing you should see in the stadium.

"But it was all right for me, it didn't bother me too much."

The 34-year-old German added: "You're set up for a corner or whatever and then somebody is pointing a laser in your face and it's quite annoying.

"But you have to deal with it in the moment and try to concentrate on the game."

Laudrup saw his side trail on the night to Njongo Priso's goal, level a minute later when Roland Lamah struck and then lose to Hamza Younes's header.

Having gone into the game 5-1 ahead there seemed little doubt that Swansea would progress.

But the night left Laudrup unhappy on two fronts - Tremmel being targeted and Swansea's lack of a cutting edge.

On the Tremmel incident, the Dane said: "The authorities or the police or Uefa have to do something with that. It's not the only ground where it has happened.

"It's difficult, what do you do? You can search people, but a small pen is easy to bring in."

He added: "We are happy to go through and I thought we would after the first leg, but once more we have seen what can happen if you don't take chances when you get them.

"We knew they would go out and press us because they had to in front of their own fans after a result like last week.

"They took a lot of risks and we knew we would have a lot of counter-attacks but we did not finish them. They were huge chances.

"It's fantastic to go through, but we should have done better."

Swansea had skipper Leon Britton sent off in the 87th minute for a second yellow-card offence.

"The fourth official said it was a second yellow card for wasting time," said Laudrup.

"Those things can happen away from home in Europe. We have to accept that. It's another experience."