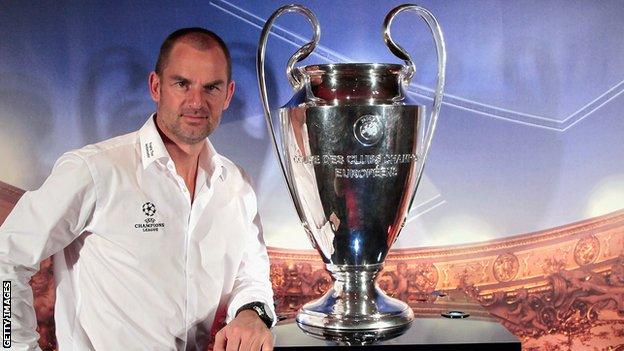 Captain Siem de Jong is sidelined with a collapsed lung, while Toby Alderweireld and Christian Eriksen are on the brink of being sold.

"We think we can get some points against Milan and Celtic," the former Rangers player told BBC Scotland.

"But, of course, Celtic will think exactly the same."

De Boer's twin brother, Frank, who also turned out for Rangers, has been the manager at Ajax since late 2010 and his first match in charge in a caretaker's capacity was a 2-0 win away to AC Milan in the Champions League.

Since then he has steered the Amsterdam club to three consecutive Eredivisie titles.

Like Celtic, Ajax is losing some key players so it's difficult to say where the club is standing at this moment

"It's a great draw," enthused Ronald de Boer, who played alongside Frank when Ajax won the European Cup for a fourth time in 1995 - beating AC Milan in the final.

The brothers also turned out for Barcelona, who will be strong favourites to top Group H.

"Ajax has never played an official match against Barcelona and there is such a lot of history there with all of the Dutch legends that have played at the Nou Camp," he added.

"And then there is Milan, who are a great team, with seven (European Cup) trophies."

Celtic have played Ajax three times in Europe, with the Glasgow side prevailing twice, revenging a 1971 European Cup quarter-final loss with a 4-3 aggregate victory in the first round of the same competition in 1980 and winning a Champions League qualifying tie in 2001.

On that occasion, Celtic stunned the Dutch with a 3-1 win in Amsterdam - Bobby Petta, Didier Agathe and Chris Sutton with the goals.

While Celtic reached the last 16 in the Champions League last season, Ajax finished third in a group that included beaten finalists Borussia Dortmund, Real Madrid and Manchester City - before being eliminated by Steaua Bucharest in the Europa League's round of 32.

Celtic have lost influential trio Victor Wanyama, Gary Hooper and Kelvin Wilson this summer, although Derk Boerrigter has been recruited from Ajax along with fellow Dutchman Virgil van Dijk and other new faces are due to arrive before Saturday's signing deadline.

Ajax plan to cash in on Eriksen, who is in the last year of his contract, with Tottenham the favourites to land the Danish playmaker, while Belgian defender Alderweireld has been the subject of interest from English clubs and a failed bid from Atletico Madrid.

"Like Celtic, Ajax is losing some key players so it's difficult to say where the club is standing at this moment," added de Boer, who played more than 100 games for Rangers between 2000-04.

"Eriksen was the strong pillar of the team for three seasons. He was growing and growing and always an important player.

"But when somebody leaves, somebody else steps in and we have so much talent in our academy.

"PSV Eindhoven had an average age of 20 against Milan and went close (in the final qualifying round) - even in the San Siro.

"We know we can do it. Frank did it in his first match in charge, he won 2-0 at Milan with a very young team.

"Ajax maybe paid big money for players once but we don't do that any more.

"Bojan Krkic (on loan from Barcelona) is very dangerous, as is de Jong when he is fit.

"But the Ajax strength has always been to play as a team and that remains the case today."