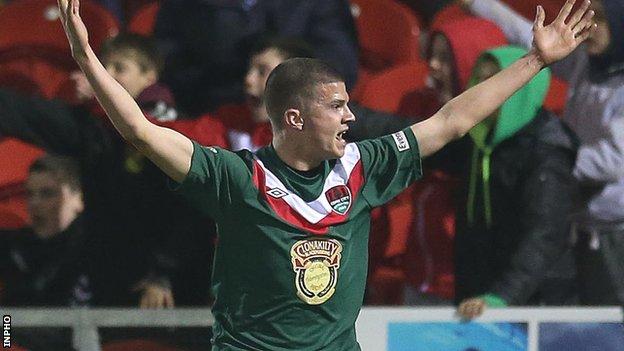 Morrissey curled into the top corner for a 13th minute opener as the hosts took control and the striker added a second midway through the second half.

Another clinical finish completed the treble before Ciaran Kilduff's superb lob over Gerard Doherty made it 4-0.

Rory Patterson, who had an earlier penalty appeal turned down, scrambled home a late consolation goal.

The Candystripes remain fourth in the table although they trail new leaders Dundalk by 10 points.

Doherty made an impressive save to keep out Ian Turner's shot two minute before Morrissey broke the deadlock.

Derry improved after the goal and Patrick McEleney saw his powerful strike saved by Mark McNulty.

Patterson was brought down by John Dunleavy in the area early in the second half but referee Sean Grant rejected strong claims for a spot-kick.

Morrisey made it 2-0 after 67 minutes and his hat-trick goal came two minutes later.

Patterson netted six minutes from time but it was too late for a comeback at Turners Cross.