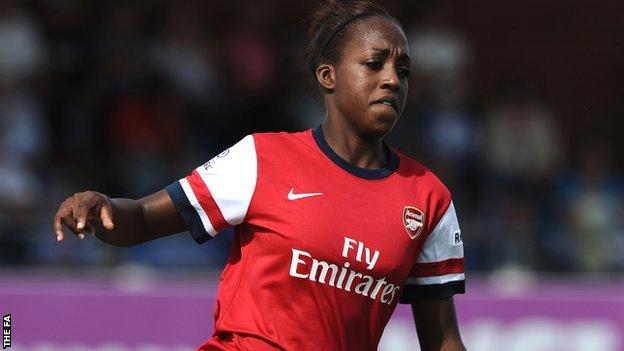 Arsenal moved to within two points of Women's Super League leaders Liverpool with a hard-fought 1-0 win at Chelsea.

Striker Danielle Carter's seventh goal of the campaign gave the Gunners a victory that keeps them in contention for a third successive WSL title.

Sue Smith gave bottom team Doncaster Belles their first win of the season, a 1-0 triumph against second-bottom Lincoln, who had a penalty saved.

Victory put the Belles one point behind Lincoln with a game in hand.

In a bright start by Arsenal, captain Steph Houghton forced Chelsea goalkeeper Marie Hourihan into a fine save from an 11th-minute header.

The Gunners went ahead in the 29th minute, playmaker Kim Little and right-winger Ellen White combining to set up Carter to score from close range.

White and right-back Alex Scott both went close with cross-shots as the visitors looked to increase their lead.

And three minutes before the break Hourihan had to save from left-winger Rachel Yankey after the keeper's intended clearance was blocked by Carter.

White should have increased Arsenal's lead on the hour, but with only Hourihan to beat, the England player lobbed straight into the keeper's arms.

Carter then flashed a 15-yard shot over the bar as the Gunners continued to press for a second goal.

And in stoppage time midfielder Jordan Nobbs missed a close-range chance to wrap up victory.

But Arsenal finished as deserving winners to keep their title chase on course and leave Chelsea fifth in the table.

But Lincoln went closest to a first-half goal, striker Aileen Whelan having a 27th-minute header cleared off the line by defender Ashleigh Mills.

Lincoln squandered a great 69th-minute chance to equalise as midfielder Remi Allen had a penalty saved by Nicola Davies following a Dani Cox foul on Whelan.

And despite late pressure by the visitors, Donny held on to claim a long-awaited victory and a clean sheet after conceding 15 goals in their previous two matches.