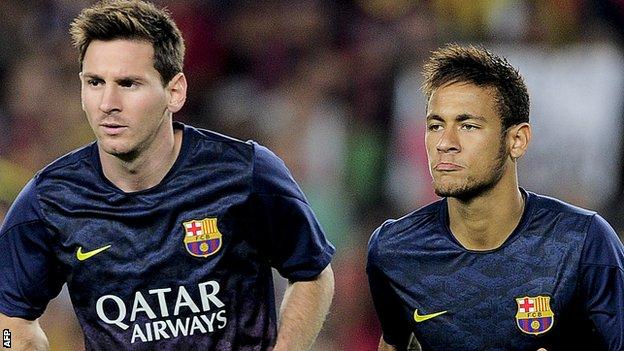 The Spanish champions travel to Valencia on Sunday looking to make it three league wins from three, with Martino confident his summer transfer activity will pay off.

Brazilian Neymar, signed from Santos for £48.6m in the summer, started a match alongside four-time world player of the year Messi for the first time in Wednesday's Spanish Super Cup win over Atletico Madrid but the pair were well shackled by their visitors.

Martino said: "They played a good match but it's true that they did not link up much. Although I have no doubt they will connect eventually."

"Neymar is gradually getting into his stride," the former Barca and Spain goalkeeper said. "I think we will have a lot more left to enjoy from this pair."

Valencia, who have won one and lost one this season, have been boosted by the signing of Colombia forward Dorlan Pabon from Mexican side Monterrey, brought in to fill the void left by Spain striker Roberto Soldado's move to Tottenham.

They are still waiting to finalise the signing of Tottenham midfielder Gareth Bale, after he agreed personal terms with them.

Elsewhere Atletico, who have won both their league matches this season, face a trip to fellow Champions League side Real Sociedad on Sunday.

AC Milan's coach Massimiliano Allegri is frustrated over constant speculation surrounding his future, ahead of Sunday's home match against Cagliari.

He said: "For two years, there has been talk about the next coach of AC Milan. People have to be more objective.

"There is too much pontificating from the outside, there should be more respect for other people's work. People on the outside are trying to make me angry but it doesn't work."

Milan, who qualified for the Champions League group stage with Wednesday's 3-0 win over PSV Eindhoven, began their campaign with a 2-1 defeat at promoted Verona last weekend.

Napoli visit Chievo on Saturday with striker Gonzalo Higuain looking for his first goal since his £34.5m move from Real Madrid.

Germany forward Mario Gomez, who joined will also want to get off the mark for his new side as they travel to Genoa on Sunday.

Serie A debutants Sassuolo will attempt to pick up their first-ever top flight points on Sunday at home to Livorno, who were promoted with them last season, with Roma hosting Verona.

Bundesliga runners-up Borussia Dortmund travel to Eintracht Frankfurt on Sunday looking for a fourth league win in as many matches.

Their perfect start to the season comes after striker Mario Gotze joined Bayern Munich for a reported £31.5m in the summer.

"One can say that there is a chance the team will play even better," said coach Jurgen Klopp.

"Mario's transfer has not had a negative impact on us. It would have been nice if it had not happened but from a sporting point of view, his loss is already irrelevant."

After two defeats, including a 6-1 demolition by promoted Hertha Berlin in their season opener, Frankfurt picked up some points last week with a 2-0 win over Eintracht Braunschweig.

Treble winners Bayern Munich top the table on 10 points from four games, one ahead of Dortmund, after drawing 1-1 at Freiburg on Tuesday ahead of a trip to Prague to compete in the Uefa Super Cup against Chelsea on Friday.

Last season's French league top scorer Zlatan Ibrahimovic is still looking for a first goal of the new campaign as his Paris Saint-Germain side host newly-promoted Guingamp on Saturday.

PSG had laboured to two draws before winning at Nantes last weekend and are in eighth place - four points behind leaders Marseille.

Boss Laurent Blanc said: "I don't think the players are at their best yet, physically. Every match should bring us closer to the level of physical fitness we need. It will come, that's for sure."

Marseille are looking for a fourth straight win when they host second-place Monaco on Sunday, while Lyon want to bounce back from its Champions League setback with a win at Evian on Saturday.

Lyon lost at Real Sociedad 2-0 on Wednesday and 4-0 on aggregate, failing to make the group stage of the competition.

Reigning champions Porto travel to Pacos Ferreira on Sunday having won their first two games of the season, while Sporting Lisbon entertain Benfica the day before.