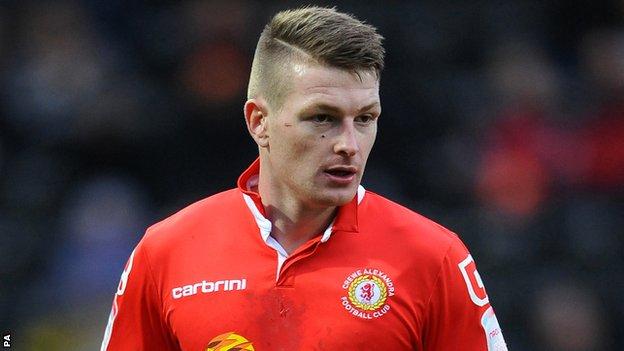 Liverpool-born Dugdale, 25, has not played for the Alex since March, missing April's Johnstone's Paint Trophy win after his baby son died in the week prior to the Wembley game.

A pre-season injury and George Ray's form has seen him fall down the pecking order this term, leading to this loan.

Dugdale initially left Crewe for Droylsden in 2007 having made only one first-team appearance, before returning in July 2010

Fellow centre-back Foster, 32, had his contract cancelled by mutual consent only two months into a two-year deal with the Merseyside club.

And Crewe boss Steve Davis explained to BBC Radio Stoke why he allowed Dugdale to leave: "It's such a long time since he's played 90 minutes, and he hasn't had a run of successive of games for a long time. There's nothing like playing some matches for that intensity.

"We've got enough centre-halves to let him go out, get some games, and we'll assess it at the end of the month."

Dugdale, a product of the Crewe youth academy, is in his second spell at Gresty Road having left between 2007 and 2010.

In total, he has made 97 appearances for the Alex, but has now been allowed to leave for first-team football.