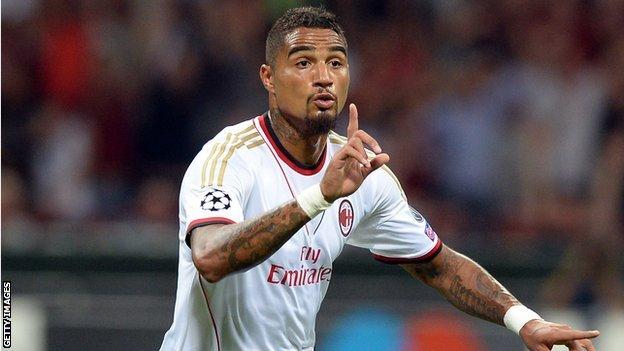 Boateng, who was born in Berlin but switched his allegiance to Ghana in 2010, has signed a four-year deal.

"I'm happy to be back home in Germany, in the best league in the world," said the 26-year-old ex-Hertha Berlin man.

And he is eligible for Schalke's Champions League campaign this season despite having played - and scored - in Milan's preliminary round play-off.

Boateng struck two goals in Milan's 3-0 win over PSV Eindhoven on Wednesday, a victory which sealed the Rossoneri's place in the group stage.

But under Uefa rules he can still play for Schalke, who have been drawn in a group with Chelsea, Basle and Steaua Bucharest.

On his Twitter account, the midfielder revealed the move to Schalke was first proposed "a year ago".

He added: "Sometimes you have to wait for good things and opportunities.

"It was just perfect - this club with its crazy fans, a young coach (Jens Keller), the sporting director Horst Held... I knew already I wanted to come."

Boateng left Hertha Berlin, his first club, in 2007 after 42 appearances and four goals. He joined English Premier League side Tottenham but played only 14 times in two years.

Then followed a brief loan spell at Borussia Dortmund and a move back to England to play for Portsmouth before he finally settled in Milan in 2010, where he went on to make 74 appearances and scored 10 goals.

In January he hit the headlines when he walked off the pitch during Milan's friendly against Italian lower division club Pro Patria after suffering racist chants.

Boateng also brought a premature end to his playing days with Ghana in in November 2011 when he retired, claiming his body could not cope with club and international football.

But In August he made himself available again and has been included in the Black Stars' squad to face Zambia in a crucial 2014 World Cup qualifier in September.