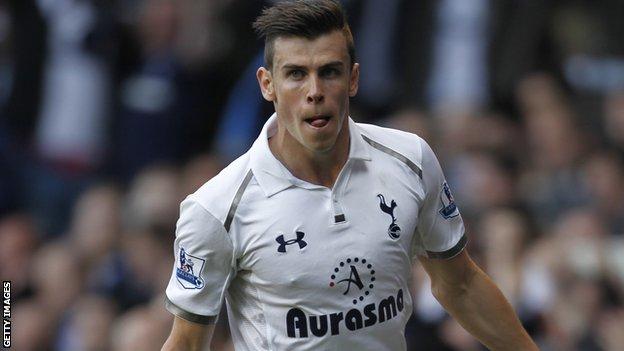 With Gareth Bale's move to Real Madrid from Tottenham finally completed, the world transfer record has been broken again.

From Alf Common, the first £1,000 player, to Johan Cruyff's £922,000 deal to sign for Barcelona, to Bale's £85.3m move to Spain, huge figures have been spent by clubs looking to land the world's best players.

BBC Sport looks at the biggest moves, how Bale compares to current world stars and some memorable quotes on the mega deals. 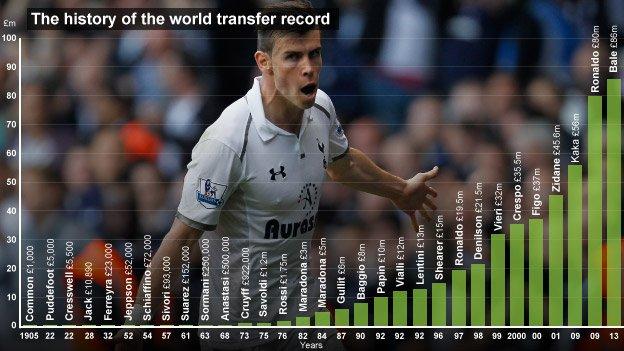 Common's move from Sunderland to Middlesbrough in February 1905 was the first time a player had ever been transferred for a £1,000 fee. The forward went on to help Middlesbrough stave off relegation to Division Two that season.

Liverpool's Uruguayan striker Luis Suarez has been a big talking point of this summer's transfer window but it was his Spanish namesake who was making headlines in 1961. The midfielder moved from Barcelona to Inter Milan for a fee of £152,000 and helped the Italian side to three league titles and two European Cups.

Barcelona were involved in a record-breaking fee again in 1973, but this time they were the ones doing the spending. The Spanish giants spent £922,000 to bring in Cruyff from Ajax and the Dutch forward spent five years at the Nou Camp - winning one La Liga title and the Copa del Rey.

Two years after Cruyff's move to Barcelona, the record was broken again as football saw its first £1m player when Italian Giuseppe Savoldi moved from Bologna to Napoli for £1.2m.

Only one player has broken the transfer record twice and that honour belongs to Maradona, who in 1982 moved from Boca Juniors to Barcelona for £3m. The Argentina legend's time at the Nou Camp was short-lived, however, as two years later Napoli paid £5m to bring him to Italy.

An Italian team was behind another record in 1992 when Jean-Pierre Papin moved from Marseille to AC Milan. The France striker helped the Serie A side to two league titles before leaving for Bayern Munich in 1994.

Alan Shearer's move from Blackburn Rovers to Newcastle United in 1996 caused a stir with the much-coveted striker choosing to return to his hometown club in a £15m deal instead of joining Manchester United. No English club has broken a world transfer record since.

Portuguese star Luis Figo stunned football when he left Barcelona to join Real Madrid in 2000. Real had to pay their bitter rivals £37m to land Figo, who helped them to two La Liga titles and the European Cup in 2002 - the last time the Spanish giants won the competition. The move was also the first of five world transfer records broken by Real.

They would beat their own record a year later by signing France midfielder Zinedine Zidane for £45.6m from Juventus. The World Cup winner ended his career in Spain after adding a La Liga title and European Cup to his honours list.

The summer of 2009 saw Real shock world football not once, but twice. Not happy with landing Kaka from AC Milan for £56m, the Spaniards also brought in Cristiano Ronaldo for £80m from Manchester United. Ronaldo has gone on to be regarded as second only to Lionel Messi as the world's best player.

Bale began his career as a promising left-back with Southampton before moving to Tottenham. His hat-trick against Inter Milan in 2010, despite coming in a 4-3 defeat for Spurs, announced the Welshman to the world. Last season in the Premier League, Bale reached a new level.

The new Real Madrid signing scored nine winning goals in the Premier League last term - more than any other player. Bale made 33 league appearances and scored 21 goals from 133 shots.

Bale may have racked up only four assists but he did create 75 chances for his team-mates - more than Messi (47) and Ronaldo (63).

The 24-year-old also had a higher pass completion rate than Ronaldo, with 79% of his 1,131 passes reaching their desired target compared with the Portugal attacker's 77%. Messi led the way among the trio with 85% from 1,759 passes.

But the former Tottenham man attempted 272 crosses last season - much more than Messi (41) and Ronaldo (74).

Bale also proved willing to put a foot in, with 73% of his 33 tackles coming off.

"I was compelled to accept the transfer" - Italy forward Roberto Baggio on his £8m move to Juventus in 1990 after Fiorentina fans rioted following the deal.

"We aren't going to start anything but, and I don't want this to sound like a threat, I'm not going to forget this. Someone who does this to me will pay for it" - former Barcelona president Joan Gaspart at the time of Figo's move to Real Madrid.

"I wanted to stay but the world crisis affected my decision. I knew I'd only leave Milan to play for Real" - Kaka reveals financial problems at AC Milan forced him to agree to his £56m move to Real Madrid in 2009.

"Do you think I would get into a contract with that mob? Jesus Christ, no chance. I wouldn't sell them a virus" - former Manchester United manager Sir Alex Ferguson on the possibility of selling Ronaldo to Real Madrid.