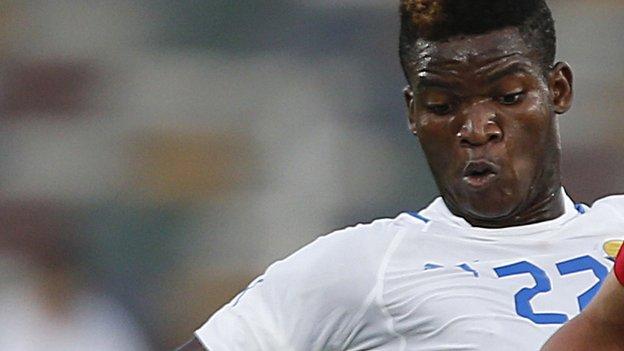 Tunisian club CS Sfaxien became the first qualifiers for the Confederation Cup semi-finals after a 1-0 win over Ethiopian visitors Saint George on Sunday.

Fakhreddine Ben Youssef scored the only goal of a drab duel after 68 minutes at Stade El-Menzah in Tunis to give the hosts an unassailable eight-point Group A advantage with two rounds left.

After an impressive 3-1 triumph in Addis Ababa two weeks ago, a Sfaxien side coached by former Dutch star Ruud Krol were expected to win convincingly although playing 240km from home.

But the absence of suspended Ivorian striker Idrissa Kouyate and several injuries disrupted the home side, who have won the second-tier African competition twice.

The game was moved to the Tunisian capital from Mediterranean industrial city Sfax because a pitch described as a "sand pit" by Krol is being repaired.

Sfaxien have 12 points, compatriots Etoile Sahel and Malians Stade Malien four each and Saint George prop up the table with just three after three consecutive losses.

TP Mazembe of the Democratic Republic of Congo regained the Group B lead they lost to CA Bizertin two weeks ago by defeating the Tunisians 1-0 in mining city Lubumbashi.

It was a close call for the 2010 Fifa Club World Cup runners-up, though, as Rainford Kalaba, one of several Zambians in the Mazembe line-up, scored with only five minutes left.

The Congolese club had a couple of first-half scares as Adem Rjaibi and Yassine Salhi went close to breaking the deadlock at a packed Stade Kamalondo.

Mazembe controlled the second half and the pressure paid off to give them a two-point lead over Bizertin and FUS Rabat of Morocco with two rounds left.

On Saturday, Stade Malien of Mali stunned Etoile Sahel of Tunisia 1-0 to claw themselves back into contention for a semi-final place.

Although Etoile, the only club to win every African title, no longer rate among Africa's giants, they faced Stade boasting a perfect home record in Confederation Cup mini-league games.

Stade were held 0-0 by Etoile in Bamako two weeks ago, strengthening the view that the Tunisians would use home advantage to collect three points.

The Etoile side, coached by France-born Denis Lavagne, dominated the opening half at Stade Olympique in Mediterranean resort Sousse without creating clear-cut chances.

Issam Jebali went close for Etoile eight minutes into the second half of a match staged behind closed doors because of ongoing post-Arab Spring tension in the country.

But the home side was rocked nine minutes from time when Lamine Diawara scored his second goal in the competition this season to earn Malien victory.

A superb save from former Tunisia goalkeeper Aymen Mathlouthi in the dying minutes prevented the 2009 Confederation Cup winners adding a second goal.

Entente Setif of Algeria suffered a severe blow in the other group when held 1-1 at home by 2010 Confederation Cup title-holders FUS Rabat of Morocco.

Khaled Gourmi converted a 14th-minute penalty for the Algerian club that won the CAF Champions Cup - forerunner to the Champions League - 25 years ago.

But Mohamed Lagraa of Setif was sent off just before half-time after getting a second yellow card and FUS levelled 13 minutes from time through Brahim El-Bahri.