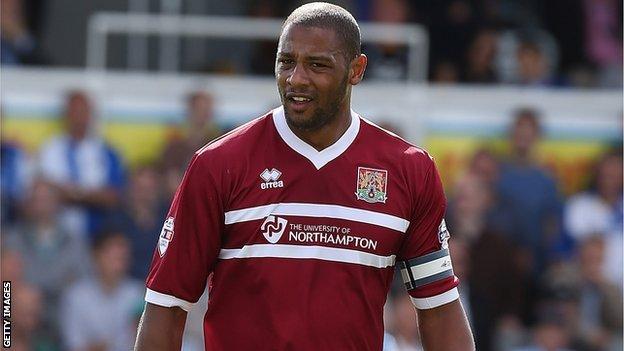 The visitors made the brighter start, with Niall Canavan failing to beat Matt Duke from six yards after Matt Sparrow's pinpoint free-kick.

But Canavan broke the deadlock in the 67th-minute, rising well to head home Hawkridge's deep corner.

The hosts equalised in the 87th minute, Platt poking home after Scunthorpe failed to deal with Lee Collins' pass.

"It was probably a fair result. We are a team that is developing - I'm talking two or three months, not two or three games.

"I honestly think this is a massive point for us today. After they scored, we could have crumbled.

"The goal against us is unacceptable. Our defender is moaning that he was fouled - but you've either got to bring it to the ref's attention or head someone's head to prevent that.

"When I have a game like that, the only thing I want to do (straight away) is put a session on. We know what we need to do."

"Well it's not good enough because we should have had all three points today. It should have been all wrapped up. We were very, very good particularly in the first half.

"I couldn't have asked for any more and the fact that we were very creative and we had golden opportunities, and all it needed was to hit the target and composure.

"There's loads of positives we can take out of this game. Like I say it was an excellent performance when we got the ball down and played, we caused them all sorts of problems. I would say we marshalled the game for a good 75% and we've created a hell of a lot of opportunities to finish the game off.

"There is things that we're doing right and it will come right and the players are trying their hardest. They are working extremely hard."