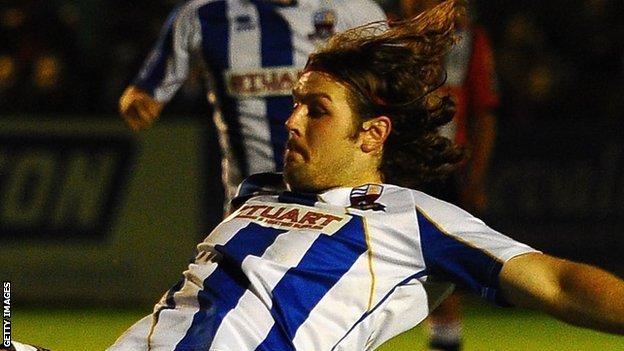 Nuneaton climbed to second in the Conference Premier as they maintained their unbeaten start to the season with two late goals to consign Wrexham to a third consecutive defeat.

Unmarked Andy Brown met Danny Sleath's cross for his fourth goal of the season from close range on 75 minutes.

Neil Ashton was denied an equaliser when his 88th-minute header came back off the bar from Johnny Hunt's corner.

Louis Moult was then set up by Adam Walker to seal victory in injury time.

The next test for Wrexham is at home to Luton Town on Friday night (13 September, 19:45 BST), while Nuneaton visit struggling Dartford the following day (14 September, 15:00 BST).,

"We are perhaps getting the rub of the green and that won't always be the case, but I don't think Wrexham can have too many complaints.

"It can come back and bite you. And our aim remains simply to retain our place in this league.

"You never get bored of winning. But we've got to come in and work hard for another week as there is another challenge to come on Saturday at Dartford."

"First half we were solid but we didn't create a lot and in the second half I thought we just waited for them to score.

"It's a struggle at the moment but we have to dig deep and come through it. Nobody's going to feel sorry for us.

"Everybody enjoys playing Wrexham anyway and a Wrexham team that's not at the top of their game, people are going to enjoy it even more. We have to get back to it as quick as we can."