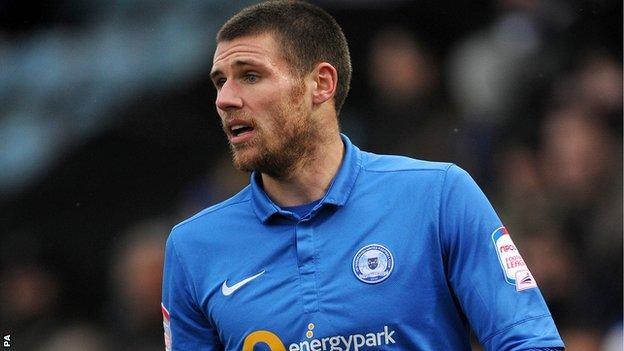 Summer signing Vadaine Oliver opened his account for Crewe on 15 minutes, sliding in from a Brad Inman cross.

Tyrone Barnett halved Crewe's lead by the break, after Mark Little's shot was saved, before Bostwick steered in Lee Tomlin's corner to complete the rescue.

Barnett could have had two in a first half dominated by the visitors, but he crashed his free header off the post after a mix-up between goalkeeper Steve Phillips and defender Mark Ellis.

The Posh striker eventually found the mark, pouncing on a loose ball to lash home after Phillips had denied Little.

Posh then piled on the pressure, Phillips keeping out a powerful Barnett header and Tomlin blazing over the bar late on, before Bostwick struck in the second minute of added time.

"It's a case of mixed emotions. I was really pleased with our performance against one of the form teams in this league but I'm just disappointed that we chucked it away a bit.

"We just made sloppy mistakes. We weren't clearing our lines when we should have done.

"Their equaliser hit one of our lads in the face before it went in. That's the way it's going for us at the moment

"I changed to get round to get some goals from somewhere and it's nice that both strikers have scored."

"Whenever you're 2-0 down, to get anything out of it the players deserve credit for that. We kept going.

"I thought we started the game magnificently, with complete control but goals change games and, after their first two shots at goal, we're 2-0 down.

"It's important that, when you have a defeat you don't lose the next game and whenever you're trying to achieve what we are this season, you can't afford to lose two games on the bounce.

"We've got to really get more clean sheets. We don't do that well enough. It's a big area we need to improve on."