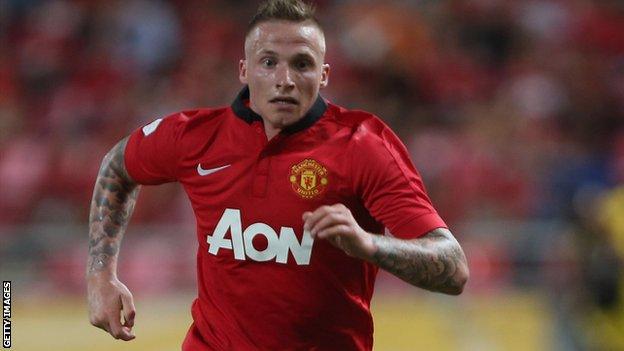 Peterborough say they as the 24-year-old is "not for sale".

And Man Utd were unwilling to allow Buttner to leave on loan unless they were able to secure the signing of Leighton Baines from Everton.

Time ran out for that to happen before the

With the English window closing on Monday, there is still time for Man Utd to complete the capture of Baines, but that would come too late for Celtic's hopes of securing Buttner.

Following the Celtic manager Neil Lennon told BBC Scotland: "There is interest in the player.

"I am looking for a left-back and his name has cropped up, so we are trying to do a deal there.

"I've always maintained we've been trying to get a left-back because the only recognised one we have really is Emilio Izaguirre and he's played a lot of football and at times it does take its toll on him."

He has made 13 appearances for United, scoring two goals.

Besiktas could now be favourites to sign the 24-year-old should he leave Man Utd.

As the Scottish deadline approached, Buttner's agent, Aleksandar Bursac, told BBC Scotland: "Talks are ongoing and we hope that something will happen.

"It's not only Celtic, but Besiktas are also very keen. Alex favours Celtic because of the Champions League and the traditions of the club.

"We hope that United recognise that letting him go on loan would be great for his development."

Celtic did manage one deadline-day signing, securing the services of

However, Lennon appears to have been keen to add another striker to his squad ahead of the Champions League group stage.

Bids of around £1.2m were not enough to entice Peterborough to part with Tomlin, who they signed from Rushden & Diamonds in 2010 and who has since scored 39 goals in 122 appearances for the English League One side.

The failure to secure Tomlin did not prevent Celtic from loaning striker Tony Watt to Belgian club Lierse.