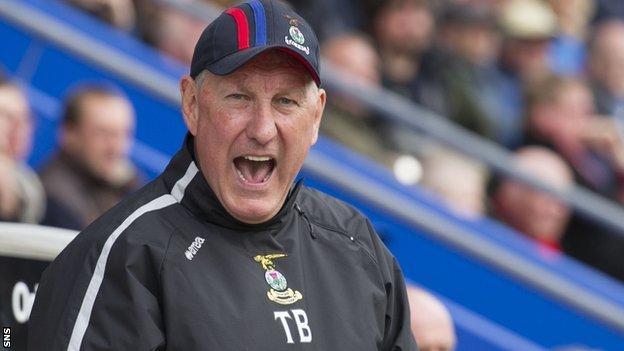 A first-half double from Billy McKay was enough to keep the hosts at the top of the Scottish Premiership.

But Butcher feels they should have added to their tally to make for a more convincing result.

"It was a good three points, but for some poor finishing and [Jamie] MacDonald in goal it could have been more," Butcher told BBC Scotland.

"We had some great chances in the second half it was nice to score two goals like that in the first. Billy McKay is on fire."

Hearts were reduced to 10 men for the second week running as Jamie Hamill was dismissed for deliberate handball by referee John Beaton.

McKay, on a hat-trick, took the spot kick but could not beat MacDonald, leaving Butcher frustrated that designated penalty-taker James Vincent had handed over responsibility.

"I gave Vincent a rollicking," Butcher explained. "He is the penalty taker and he should take it. I don't go much for the sentimentality of getting a hat-trick.

"For me it was a case of getting that third goal. I've told him in no uncertain terms he will take the next one."

McKay, 24, was an unrelenting threat from Caley Thistle, grabbing his fourth and fifth goal of the season against Gary Locke's men and Butcher lauded his Northern Irish forward.

"McKay hit a really crisp volley, he had one-on-one chances against the keeper and on another day he could have four or five goals," he continued.

"He's on fire. He leads the line really well. Fair play to Hearts they kept going and are a side which have only lost once this season and undefeated in three after that.

"We're not playing mugs, even though they are young and bottom of the lead that is only because of the 15-point administration deficit.

"They showed a lot of spirit in the team and we had to work hard to secure the win. A third goal would have made it better.

"We played much better in our first four games but still won this one so I'm pleased at that. It's a great points total 13 points out of 15 and we can certainly enjoy the next two weeks.

"In the end it was comfortable but 2-0 was a strange result."