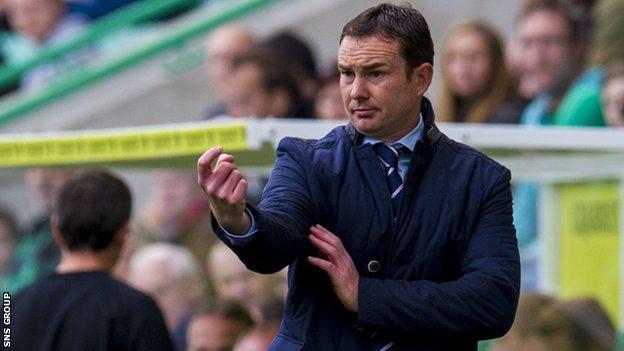 Ross County manager Derek Adams was frustrated not to leave Easter Road with maximum points after a 0-0 draw against Hibernian.

"With the chances created over the 90 minutes there is no doubt we had the better opportunities," said Adams.

"I thought the players played really well. They showed a great togetherness and organisation."

Adams stuck with the same line-up that had shipped three goals in Tuesday's surprise League Cup loss at Stranraer.

The visitors shrugged off that disappointment with the kind of defensive solidity that served them so well last season, although they were rarely stretched by a pedestrian Hibs side.

And the result maintains the Staggies unbeaten record against the Edinburgh side.

"We had a really long journey in midweek, but in our last two league matches we have kept two clean sheets and picked up four points," added Adams.

"I think we should have won the match. We have had three gilt-edged opportunities.

"We should have taken one of those chances but we've come away with a clean sheet and taken a point following on from our victory over St Mirren."