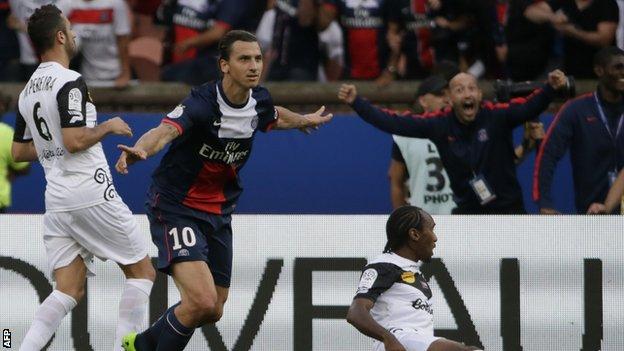 PSG looked set for a frustrating draw, before midfielder Adrien Rabiot tapped in a spill from the goalkeeper.

Zlatan Ibrahimovic then expertly took down a long ball and shot into an open net, for his first goal of the season.

The victory was PSG's second in a row, after beginning their domestic season with two draws.

The hosts dominated throughout against their newly promoted opponents, with defender Thiago Silva going closest to breaking the deadlock as he sent a first-half header against the crossbar.

New PSG head coach Laurent Blanc's wait for a first home win looked set to continue, before the rousing finale from his team.

Elsewhere, a nightmare fortnight continued for Lyon as they lost 2-1 at Evian. The seven-time Ligue 1 winners were beaten by two first-half goals from striker Kevin Berigaud.

It extended Remi Garde's side's losing streak to four matches, a run that saw them fail to reach the Champions League group stage after 2-0 defeats in both legs to Spanish side Real Sociedad.

"There is no crisis as we're only four weeks into the season. We have two wins and two defeats in the league," defender Bakary Kone said.

"We have to work to get back on the right track."