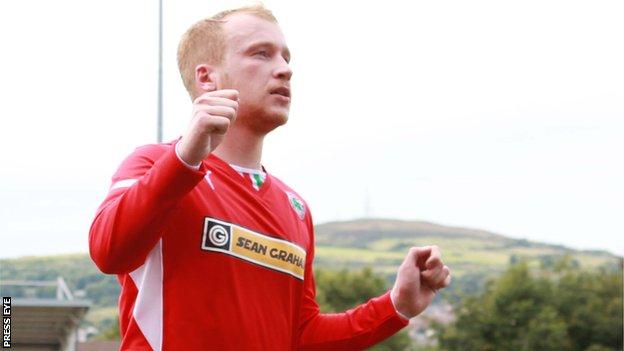 Boyce said that one supporter had threatened to "cut our throats" as the Reds duo watched the Windsor Park game.

"All fans were dead on and having a bit of banter but there is always one to ruin it," said Boyce on Twitter.

Boyce said that the fan had directed further sectarian abuse at them.

"We had to get a lift (with the police) to (our) car and (be) escorted from ground by police. Was sheep white," continued Boyce.

The Cliftonville striker was unavailable for comment on Saturday evening but BBC Sport has established that he did post the tweets which are at the centre of the story.

Boyce watched the game alongside Linfield supporters after receiving tickets from one of the Windsor Park team's squad.

"The irony is that a Linfield player was friendly enough to give us his tickets. Still in shock," continued Boyce on Twitter.

"So you can't go to a football game to watch a match? I expect banter not sectarianism and death threats."

Boyce added that the supporter who abused him and Devlin "was a man (of) at least 30 with about three friends and a kid aged about 12".

Neither of the Cliftonville players are believed to have made official complaints to the Police following the game.