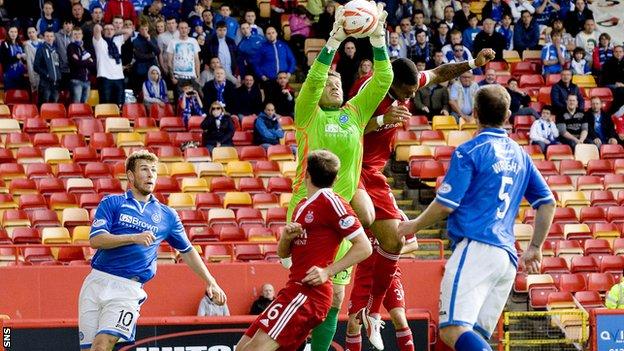 "He says he's a bit tired in there after all his exertions," Wright told BBC Radio Scotland.

"He's been great since he came in. He looks after himself and his reflexes and fitness is a testament to him."

Wright's side had chances to win as well, with Murray Davidson sending a shot over from eight yards and David Wotherspoon bringing a diving save from Jamie Langfield.

"I'm not concerned, we do know we've got goals in us," he said. "We've proven that against Ross County.

"A point away to Aberdeen is always a good point. It was important for us to get back to basics and we worked very hard, especially second half when they created more chances than us."

And ahead of Saturday's transfer deadline, Wright confirmed there will be no new faces arriving at McDiarmid Park at the moment.

He spoke of his frustration that the Scottish transfer window shuts two days earlier than the English equivalent on this occasion.

"We do quite a bit of business down in England, or try to, getting players from Premier Leagues clubs on loan," Wright said.

"One player in particular, we wouldn't have been able to do it until Monday - the club were adamant that was the case.

"I can understand why we've done it this way but it just means we won't be bringing anyone in."