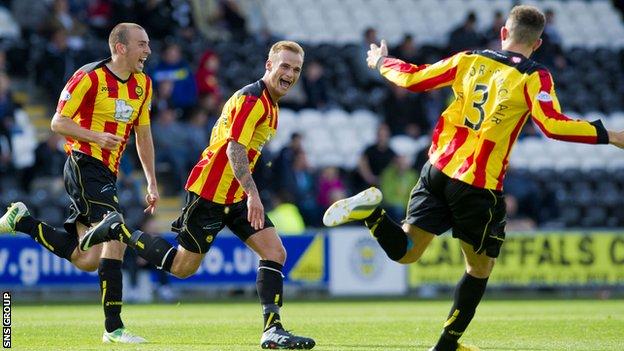 Manager Alan Archibald believes a victory at Firhill is the only thing missing from Partick Thistle's impressive start to the season.

Promoted Thistle claimed their second win on the road by coming from behind to beat St Mirren 2-1 in Paisley.

"The only thing we're missing is a home win for the fans who turned out in their numbers," said Archibald.

"We got a great reaction, we kept on passing the ball and I was delighted to get the two goals on the back of that."

Kenny McLean struck to give the Buddies the lead but Kallum Higginbotham and Ross Forbes turned the match in Thistle's favour with impressive late strikes.

"It was a worry when we went a goal down, I thought I would have to go in with the old sob story after the game, having so much possession and chances," added Archibald.

"If we hadn't taken anything, it would have been a hard one to take.

"All round with the squad, we're delighted. I'm a wee bit surprised but I'm just glad we've started so well because it gives them confidence and lets them go and play.

"One thing I want to get away from is the cuddly toy image, that's the only thing that we get tied with.

"The fans have been brilliant, they've backed us 100% and they're positive, they're good fans.

"I know it's easy to do when it's going right but they've been good and I think they recognise we've got a young squad trying to play the right way."