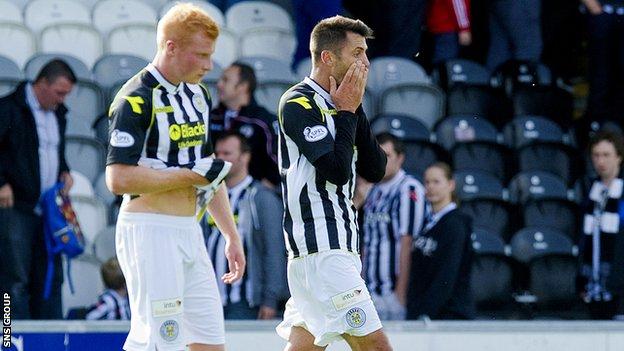 Manager Danny Lennon knows St Mirren are "underachieving" but insists he can turn around their fortunes.

The Buddies let a lead slip in the 2-1 defeat by Partick Thistle, leaving the Paisley outfit with one point after four matches in the Premiership.

"You look at St Johnstone last year, they were in exactly the same position - one point in four," said Lennon.

"But they were patient and [former manager] Stevie Lomas took them to their highest ever finish and Europe."

An advantage was also surrendered in St Mirren's midweek loss to Queen of the South, which ended the holders' defence of the Scottish League Cup at the first hurdle.

"Once again we find ourselves in a winning position and for the second game in a row we find we're on the losing end of that," Lennon reflected.

"That is something that is hurting each and every single one of us associated with our club badly and we certainly know that things need to improve.

"There's been many a good manager that's been through the same rollercoaster journey as what I'm going through just now but come through the other end of that.

"At this football club, looking at myself and the group of quality players that I do have and they're a pleasure to work with, collectively we are under-achieving and that's something that has to improve fast.

"I'm concerned, I wouldn't say I'm worried. I certainly believe that once we get this winning result, it'll kick us on and we now have a fortnight to address that, to work hard and to make sure we're ready for the next challenge."

Domestic football takes a break for two weeks to accommodate international fixtures and Lennon believes the challenge of restoring St Mirren's fortunes will benefit him in the long term.

"What we have to do in the next couple of weeks is to build these players up, build one another up and be ready full on for the challenge that lies ahead," he added.

"If my journey at this football club ended tomorrow, I would have no regrets.

"It's an absolute pleasure to come here and work and it's something that I don't want to give up easy. I love a challenge, I love being a manager at this proud football club.

"It's not a nice part of the journey that I'm going through at this present time but it's certainly one that I'll relish, I'll take every experience that's come along with that and I'll put it in my tool bag and I'll carry that along with me, hopefully, for my long managerial career."