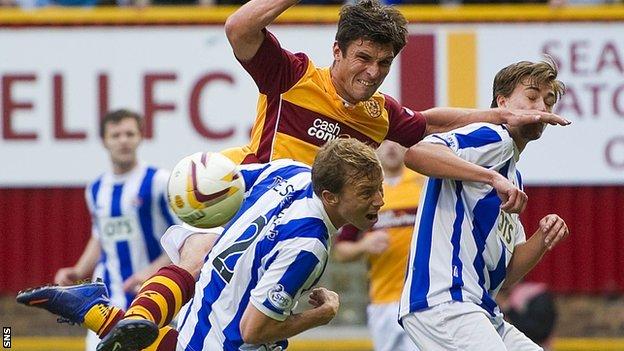 Manager Allan Johnston is refusing to panic, despite watching Kilmarnock suffer their third consecutive defeat in league and cup competitions.

on Saturday but could consider themselves unfortunate not to have earned a draw.

"You can see we're not far away. There are a lot of positives to take from that performance," said Johnston.

"I don't think the boys can do any more than that second-half performance. We really pegged Motherwell back."

Last Saturday, Hibernian won 2-1 at Rugby Park in the Scottish Premiership, then Killie lost at home to Championship side Hamilton in the Scottish League Cup second round.

But Johnston, in his first season in charge at the club, can see a way forward for his team, which now languishes in 10th place in the table.

"The players are realistic enough to know if they are playing well or not," he told BBC Scotland. "They are dominating the game and we just need to convert it into wins.

"We need to stop making individual errors because they are costing us dear. We're giving goals away that we should defend better.

"We played some really good passing football and created a number of opportunities.

"How the ball didn't end up in the back of the net I'll never know.

"It's not as if we're playing without confidence. Some of the passing and movement is different class.

"We're creating chances. If we weren't, I'd be worried about it."

Darren Barr's header, later awarded as an own goal against luckless Stephen McManus, put the visitors ahead at Fir Park, but that lead lasted only three minutes, Henri Anier firing past Craig Samson after Keith Lasley's pass cut open the Killie rearguard.

On the stroke of half-time, a fresh-air kick by Jackson Irvine allowed a low cross to reach John Sutton at the back post, from where he scored.

Kris Boyd peppered Lee Hollis's goal with fierce shots, but neither he nor his team-mates could find the goal to guarantee a point.

While Johnston did not expect any new players to arrive at the club before the transfer window closes at midnight, he said that, after that deadline has passed, he was "looking to bring a couple in" who are out of contract and therefore available.

Asked about , Johnston explained: "Heff's been a good player at Kilmarnock, but he was one of the top-paid players at the club, so it will free up a wee bit of money to bring in someone else."

And, of , a second-half substitute at Fir Park, he said: "He did really well, he linked the play well. I think he and Boyd will be a good partnership up front."