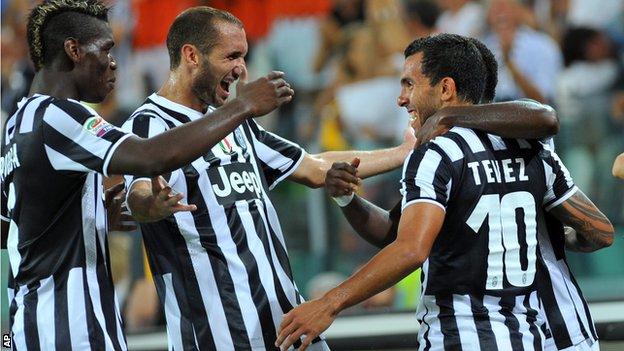 Tevez, who earlier hit the bar, added a fourth from outside the box to keep up his 100% scoring record for Juventus.

The Turin-based side had enjoyed a good start to the season, beating Lazio 4-0 in the Supercup and then edging past Sampdoria 1-0 on the opening day of Serie A.

Tevez has scored in both of those games, following his £12m summer switch from Manchester City.

But it was Chile international Vidal who caused the most problems for the Romans and he opened the scoring when he controlled Paul Pogba's reverse pass and poked the ball home with the outside of his foot from 12 yards out.

He had a second, his fifth goal against Lazio in 2013, when Bonucci's ball over the top found him in space. He took a touch before side-footing past Marchetti.

Lazio came back into the game and only trailed by a goal at half-time as Hernanes' shot from distance was parried by Gianluigi Buffon directly to Klose, who converted the rebound.

But after the break another aerial Bonucci ball set up a goal, this time for Vucinic to score a third.

And Lazio's task was made near impossible as Hernanes was dismissed for a second booking for a deliberate handball in the opposition penalty area.

Tevez struck the crossbar from outside the box before sealing the game from a similar range when he switched the ball onto his right foot and fired home.

In Saturday's other Serie A match, Napoli beat Chievo 4-2 in Verona.

Marek Hamsik gave the visitors the lead thanks to a 20-yard strike which ricocheted off the post. Alberto Paloschi levelled from close range, before a Gonzalo Higuain cross set up former Real Madrid team-mate Jose Callejon to make it 2-1 from close range.

Paloschi levelled again, this time through the legs of Pepe Reina before Hamsik struck from close range to make it four goals in two games this season.

Higuain sealed the victory with his first goal for the club since his £34.5m summer switch from Real Madrid. The Argentina international played a one-two with Lorenzo Insigne and scored into an empty net after Christian Puggioni saved his first effort.