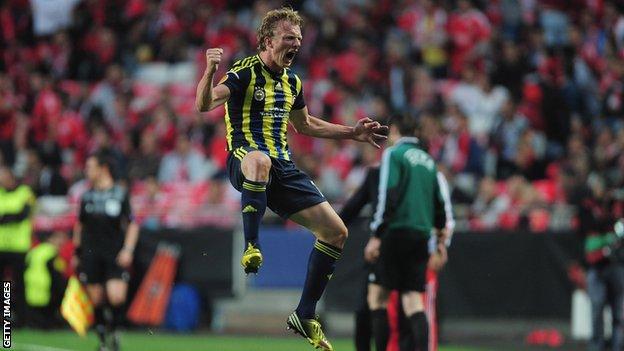 Fenerbahce recovered from a difficult week to thrash Sivasspor 5-2 in the Super Lig thanks to a Dirk Kuyt brace.

The Turkish giants were beaten in their Champions League qualifier by Arsenal.

They were then barred from competing in this season's Europa League after the failure of an appeal following their involvement in domestic match-fixing.

The result saw Fenerbahce draw level on points with Turkish league leaders Besiktas, ahead of their game on Sunday against Gaziantepspor.

Elsewhere, former Liverpool and Aston Villa striker Milan Baros scored the only goal for Antalyaspor in their 2-1 defeat by Bursaspor.

Elazigspor won 3-1 at Kayserispor, in a game in which the visitors raced into a three-goal first-half lead.