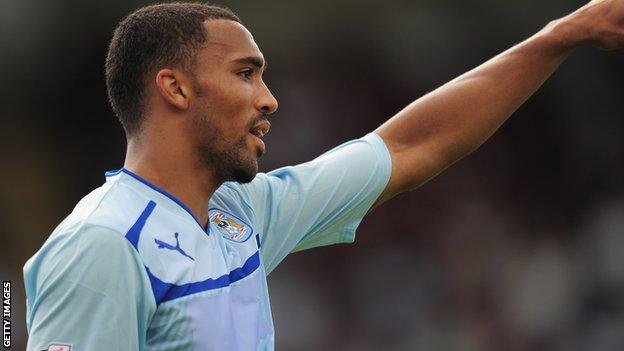 Callum Wilson scored twice as Coventry City wiped out their 10-point deduction to move off the bottom of League One with victory over Colchester United.

Leon Clarke twice hit the woodwork as the Sky Blues dominated from the start.

Wilson opened the scoring before half-time at Sixfields, tapping home after Blair Adams' shot was saved.

Coventry's first 'home' game at Sixfields against Bristol City last month drew a crowd of 2,204. They then pulled in 2,068 for the 4-4 draw with Preston, but that figure dipped to 1,789 for the visit of Colchester.

And the forward took his season's tally to eight goals in six League One games after the break, rounding the goalkeeper to slot in.

Wilson's tally for the season takes him out on his own as the country's leading scorer.

Coventry's victory, which plunges Notts County to the foot of the table, maintains the Sky Blues' unbeaten record at their new 'home' in Northampton.

But the paltry crowd of 1,789 that turned up made it City's lowest-ever league attendance.

City have now climbed above Notts County into 23rd in League One, while Colchester, who won their first two league matches of the season, have not won now in four.

"In previous weeks, we've led at half-time and not started the second half in the manner in which we'd have liked.

"But the second goal was very important.

"It allowed us to relax a little bit more and some of our football in the second half was breathtaking."

"I'm not going to criticise my players. We've been patched up. We didn't have much in terms of quality in front of their goal.

"Listen, I know when I'm beat. Coventry were magnificent. They were better than us today.

"We tried to getting the passing game going first half, we changed it and second half, went direct.

"I've never done that as a coach since I've taken over. We just needed to try and get higher up the pitch."