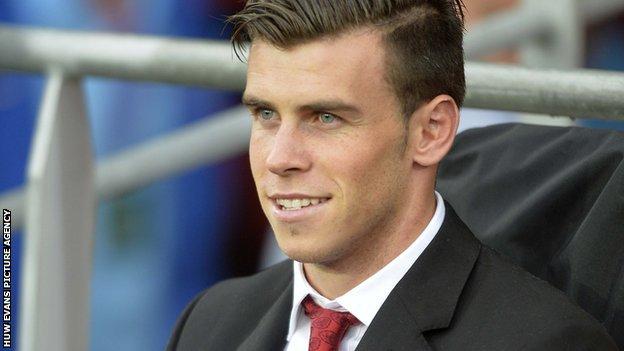 Gareth Bale says he will play for Wales before kicking a ball for his new club Real Madrid.

Bale joined the Wales squad on Monday evening for the World Cup qualifiers against Macedonia and Serbia.

The forward has not played for over a month due to a foot injury, but will travel to Macedonia.

"Hopefully, if I am picked for the national team that will help my fitness and help my country as well," said Bale.

"I am hoping to get through that and take it one step at a time."

The wing's world record transfer from Spurs to Real was confirmed on Sunday.

He was presented to Real fans at Santiago Bernabeu following his £85.3m deal at midday on Monday, but flew back to Cardiff on Monday evening.

Bale admits he is not at full match fitness, having only played in one pre-season game for the Tottenham against Swindon Town.

"I haven't had a lot of game time which is not ideal, but with a fitness programme and I hope to come back in better physical shape than I am now.

"I am hoping to be involved for the game against Villareal and I am looking forward to it."

Wales face World Cup qualifying Group A matches in to Macedonia on Friday and against Serbia in Cardiff on 10 September.

Goalkeeper Boaz Myhill says no-one should be surprised if Bale does appear in the Wales camp.

"I'm sure if he's fit he'll turn up. He always does," said the West Bromwich Albion goalkeeper.

Bale was present for the friendly match against Republic of Ireland on 14 August at the height of speculation over his impending transfer.

He ended up watching from the stand on that occasion, but Myhill says Bale's presence at that game underlined his commitment to the Wales cause.

"Even last trip when he wasn't maybe necessarily match fit he turned up and he did all his rehab work with the physios.

"He's obviously a massive player and it's a boost to have him in your camp.

"So yeah, we all hope he does come.

"I hope, obviously, it works out for him, because what an opportunity to play for Real Madrid.

"It doesn't come around all the time and what a good job he's done for Tottenham."

"That's all credit to him," added Myhill.

"Obviously in days gone by some other superstars haven't always turned up for their country so it's great to see a top, top player in Gareth turn up. He turns up every time."

However, Myhill felt unqualified to comment on whether or not the publicity and attention associated with signing for Real Madrid could affect Bale's mental focus.

Wales manager Chris Coleman has also expressed his determination to have

But Liverpool midfielder against Macedonia and Serbia because of injury.

Full-backs Neil Eardley of Birmingham and Swansea's Jazz Richards have also withdrawn from the squad and been replaced by Newcastle's uncapped Paul Dummett and Cardiff youngster Declan John.

Gareth Bale - The Real Deal is on BBC One Wales at 22.35 BST on Tuesday, 3 September