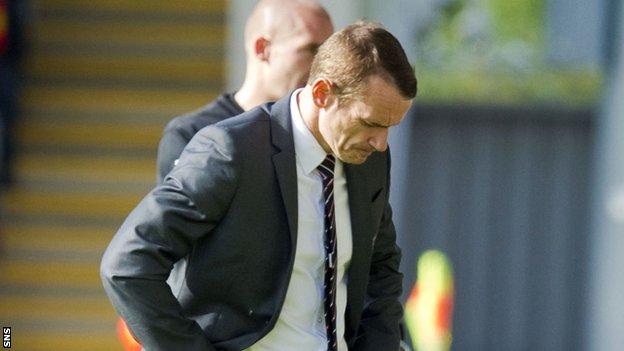 Saints have not won a Premiership game this season and last week the League Cup holders lost to Queen of the South.

However, Fitzpatrick, a former Buddies captain and manager himself, believes Lennon is the right man for the job.

"It's ridiculous," he told BBC Radio Scotland. "Six months ago he won a major trophy."

The Paisley side are being kept off the bottom of the Premiership table by virtue of the points deduction given to Hearts for entering administration.

Fitzpatrick - who won the Scottish Cup as St Mirren captain in 1987 - believes it is unfair to call Lennon's position into question, despite the club having secured one victory from their last 13 games.

"I don't think there's any pressure on Danny," said Fitzpatrick. "As a St Mirren supporter, I've seen what the guy has done since he came to the club.

"I'm actually angry about it all. Okay, we've played four games and not won one yet, but you can see the signs are there; one result and everything changes.

"The guy's brought a major trophy to the club for the first time in 26 years and he's developed some great young players."

Partick Thistle scored two late goals to overturn St Mirren's lead on Saturday, but Fitzpatrick insists that recent results are not a true reflection of the team's capabilities.

"I was at the game on Saturday and it was a fantastic game," said Fitzpatrick. "Partick Thistle deserve all the credit, but St Mirren are not as bad as their position at the moment.

"You talk about blame, I don't like that word, blame. Yes, they should be doing better, I'm not getting away from that but to say the guy is under pressure is wrong.

"It's all about results and Danny has said that himself. But it's only four games."

And Fitzpatrick believes he still has the support of the club's board and supporters.

"Stewart Gilmour and the board have done a fantastic job, I don't even think he'll be thinking in those terms," Fitzpatrick added.

"I'm in Paisley a lot and I know a lot of the St Mirren supporters. Believe me, we're all behind Danny Lennon 100 percent."