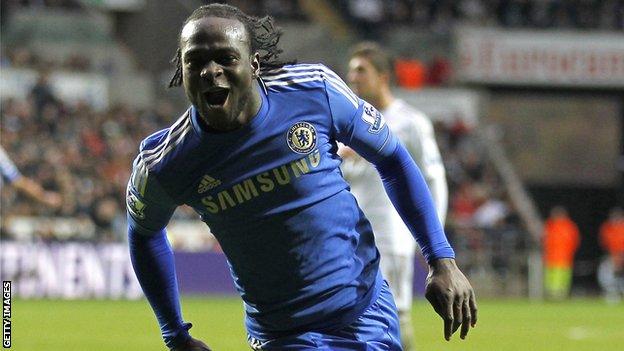 Liverpool have signed Chelsea forward Victor Moses on loan for the rest of the season.

The 22-year-old former Crystal Palace and Wigan player links up with central defenders Mamadou Sakho and Tiago Ilori, who have joined Liverpool for a combined fee of about £25m, at Anfield.

"The target is to get into the top four and for the club to compete in the Champions League," said Moses.

"I just want to gel in, the formation and players here will help me."

Moses - goals in all competitions

Victor Moses scored for Chelsea in the Capital One Cup, Premier League, Champions League, FA Cup and Europa League last season. He also scored in the Africa Cup of Nations for Nigeria.

The Nigeria international helped the Blues reach the final of the Europa League by scoring four goals in the competition, and was an unused substitute as Chelsea beat Benfica in the final.

But Moses has yet to feature in a game under new manager Jose Mourinho and has now been allowed to move to Anfield after watching Liverpool beat Manchester United 1-0 in the Premier League on Sunday.

"First and foremost, I'm delighted to have made the loan from Chelsea to a big club like Liverpool," added Moses.

"The manager [Brendan Rodgers] has done very well. There are a lot of quality players here - they're winning games and creating chances. It's a massive thing for me to be here."