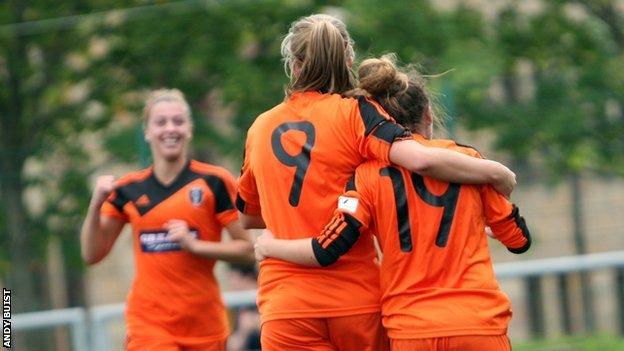 Glasgow signing Jess Fishlock finished off a fine day for City in Aberdeen, scoring the final goal in a 4-0 win over the Dons.

Ruesha Littlejohn opened the scoring in the eighth minute and a Sarah Crilly strike saw City double their lead before the break.

Littlejohn added a third before Fishlock netted a goal on her Glasgow debut to keep Eddie Wolecki-Black's side clear at the top of the table.

Spartans moved up to third place after an impressive 3-2 win over Hibernian, courtesy of a Lana Clelland double and a strike from Kerry Montgomery.

Celtic leapfrogged Aberdeen into fifth place following a 4-1 win away to Rangers.

Julie Fleeting's double was added to by Carla Jackson, before a fine strike from youngster Abigail Harrison sealed the win and cancelled out the opener from Rangers full-back Karen Penglase.

Falkirk remain rooted to the bottom of the table after going down 3-1 to Forfar.

Buchan won for the second consecutive week, picking up three points against Kilwinning following a 5-1 win and Hamilton Accies remain within touching distance of Forfar in in eighth place, after beating Hutchison Vale 2-0.